Brazilian companies are rushing to go public despite a double-digit decline in the benchmark Bovespa stock index so far this year. A record $7 billion was raised from six initial public offerings in Brazil in the first four months of 2013, propelling Latin America into second place in the global IPO race after North America.


The largest IPO to date was state-controlled Banco do Brasil’s $5.8 billion spin-off of its pension and insurance unit, BB Seguridade Participacoes.


“The biggest surprise in global IPO issuance this year has been the resurrection of the Latin American IPO market,” according to a report by Renaissance Capital. Latin America has pushed ahead of the Asia Pacific and European markets, which have been sluggish so far this year.


Smiles, the frequent-flier unit of Brazil’s Gol Linhas airline, raised $500 million. “These deals add to an already above-average year for Latin American issuance, bringing the region’s total IPO proceeds to $8.9 billion for the year to date,” the Renaissance Capital report noted. Other Brazilian companies that have issued IPOs this year include: electric utility Alupar, sugar and ethanol producer Biosev, and software provider Linx.

CEMENT MAKER PLANS IPO
Votorantim Cimentos, Brazil’s largest cement maker, plans to raise $5.4 billion later this year through an IPO in São Paulo, combined with the listing of American depositary shares on the New York Stock Exchange. Votorantim will use the proceeds to broaden its range of products in Brazil and possibly to acquire building materials companies or assets outside the country.


The decline in the Brazilian stock market reflects the country’s stagnant economy and rising consumer prices. Brazil’s GDP grew only 0.9% last year, and industrial production dropped by more than 20%. Meanwhile, inflation has broken through the 6.5% ceiling of the government’s official target range. The central bank raised the benchmark Selic interest rate by 25 basis points to 7.5% in April.


Europe could see some large IPOs in the current quarter, according to Renaissance Capital. Russia’s VTB Bank raised $3.3 billion on April 29 by selling new shares to private investors, as well as sovereign wealth funds from Norway, Qatar and Azerbaijan. German real-estate developer Deutsche Annington Immobilien plans to list in Frankfurt.

HONG KONG AWAKENS
The greater China market is also springing back to life. As Global Finance goes to press, Sinopec Engineering, a construction unit of China’s largest oil refiner, was raising about $2.1 billion in an IPO in Hong Kong. The IPO is the largest since People’s Insurance raised $3.6 billion in late November. Sinopec Engineering plans to use some of the proceeds on construction projects overseas.


At the same time, China Galaxy Securities was offering a $1.3 billion IPO in Hong Kong. Property companies in Hong Kong could spin off commercial real-estate units later this year if the Sinopec Engineering and China Galaxy deals are successful.


In the DR market, QIWI, a provider of next-generation payment services in Russia, raised $213 million by offering American depositary shares on the Nasdaq Stock Market. The company selected BNY Mellon as the depositary bank. QIWI offers a virtual wallet service through its proprietary network that enables payments to be made across physical, online and mobile channels. The service’s payment volume more than doubled last year to $5 billion.


Athens-based Coca-Cola HBC, one of the largest bottlers of Coca-Cola products in the world, appointed Citi as the depositary bank for its American depositary receipt (ADR) program. The company’s depositary shares are listed on the New York Stock Exchange. Citi’s appointment follows a share exchange by Coca-Cola HBC of all the shares of Coca-Cola Hellenic. 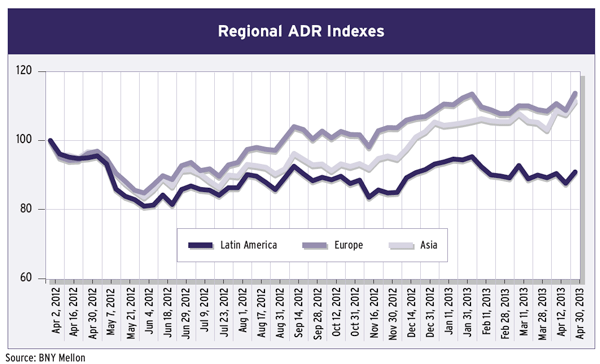