One of the few frontier markets to adopt the euro, Estonia has proved to be a beacon of hope in a region of uncertainty. 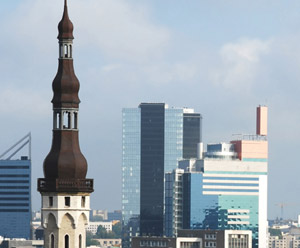 Estonia is on a healthy trajectory. Economic growth is expected to top 4% for the next four years, and unemployment and inflation are easing. Last year GDP rose 2.5%—above the eurozone average. But the country’s current rosy economic picture is a far cry from the gloom it was suffering just four years ago, when it was hard hit by the credit crunch. Reversing a run of 7%-plus growth in the years running up to the financial crisis, Estonia’s GDP declined almost 4% in 2008 and then plunged by over 14% in 2009.

In a move that still prompts debate, the government responded to the economic slump with an “internal devaluation” whereby prices and wages in Estonia were slashed by up to 50%. The success of the move is clearly illustrated by the fact that, by early 2011, economic growth was back over 7%, unemployment had shrunk from nearly 20% to below 14%, and exports were up by more than 50% on the previous year. “Estonia basically exported its way out of the crisis, because its export sector became much more competitive,” says Ivars Bergmanis, Tallinn-based head of institutional markets at LHV Bank.

Estonia’s willingness to make bold moves and its penchant for innovation have helped it blaze an impressive trail since it gained independence from the Soviet Union in 1991. Aware that having a technologically adept workforce would be a huge benefit, for example, the government in the late 1990s decided that all schools should have high-speed broadband. The intention was for students to get acquainted with computers from an early age, says Kristi Tiivas, the director of the Estonian Investment and Trade Agency.

By 2003 that emphasis was clearly paying off, as four young Estonian software engineers unveiled the Internet-based phone service Skype. “Skype was like Nokia for Finland,” says Tiivas. “It helped spark a whole IT industry.”

That industry is thriving, and Estonia is home to many emerging and established tech firms. “We are trying to make life easy for companies to set up here,” Tiivas explains. “Registering a company is easy—and can take as little as 15 minutes—and there are no restrictions on ownership. And taxes are low for companies.”

Steven Eke, an analyst covering Estonia for global risk consultancy Control Risks, says the country’s business efforts have pushed it “way ahead” of its neighbors: “By a whole range of measures, including economic freedom and the investment environment, Estonia is absolutely the leader in the region,” he says.

The country is also renowned for its transparency, both in business and at a government level. Simon Mandel, who handles Emerging Europe equities at broker Auerbach Grayson, says: “There are very low levels of corruption. I would say it’s easily the best of any country in the region in terms of transparency.”

In many ways, Estonia is more advanced than other frontier markets, says Bergmanis. “Estonia is a member of the EU, the OECD, the eurozone,” he says. It also has advantages over other European countries. “It has an innovative, entrepreneurial culture with less bureaucracy and lower unionization,” he notes. Don Scott, managing director of New York–based fund Global Frontiers, agrees: “You can get the type of rewards you’d associated with a frontier market, but you’re not experiencing the level of risks generally associated with frontier-market investing.”

A key factor that has helped Estonia develop its fleet-footed entrepreneurial culture is also one of its key downsides: its tiny population. With just 1.3 million people in the country, Bergmanis notes, “small or medium-size ventures will fit right in, but gigantic corporates should probably look elsewhere.”