Technology deals—ranging from telecommunications to biotechnology and oilfield equipment—have kept the US mergers and acquisitions arena active of late. German real estate and Asian consumer markets have also attracted buyers.

Keeping the trend toward megamergers intact, Dish Network offered to buy wireless services provider Sprint Nextel for $25.5 billion in cash and stock. Dish entered a bidding war with Japanese wireless operator SoftBank, which had already offered $20.1 billion in cash for a 70% stake in Sprint. SoftBank founder and CEO Masayoshi
Son traveled to the US in May to seek support for his offer by emphasizing the Japanese company’s edge in mobile technology.

Charles Ergen, chairman of Colorado-based Dish, which provides satellite TV services, says: “It’s simply a bidding war of two companies. We are going to win because we’ve got a better offer on the table.” Ergen says a Dish/Sprint merger would provide more-complete access to the combined firm’s 63 million retail subscribers and allow them to have bundled broadband and voice services as well.
Dish, which is being advised by Barclays, plans to fund its offer with $8.2 billion in cash from its balance sheet, as well as debt financing. Dish has already placed billions of dollars of debt in the US high-yield bond market.

LIFE SCIENCES DEAL
In the biotech sector, Thermo Fisher Scientific agreed to pay $13.6 billion in cash and to assume $2.2 billion in debt to acquire Life Technologies, which makes equipment for gene sequencing and genetic testing. Thermo Fisher is the world’s largest maker of scientific and laboratory equipment. J.P. Morgan and Barclays are advising the acquirer and will also provide bridge financing.

In the oil patch, General Electric agreed to pay $3.3 billion to acquire Lufkin Industries, which specializes in “artificial lift” technologies, such as submersible pumps for use in aging fields and shale formations. Flush with cash from the sale of its stake in NBC Universal and 30 Rockefeller Center in New York, GE is seeking to acquire companies that provide services to industrial customers.

In Germany, a group led by Patrizia Alternative Investments agreed to acquire a 92% interest in GBW, which owns and runs a real-estate portfolio, from state-owned BayernLB. The European Union required BayernLB, which took state aid during the financial crisis of 2008, to dispose of its stake in GBW by the end of 2013. The $3.3 billion transaction was the largest in the German property market in five years.
Elsewhere in Europe, an investor group led by Snam, the owner of Italy’s biggest natural gas network, agreed to acquire Total’s gas transport and storage business in the southwest of France for $3.1 billion.

ASIAN CONSUMERS
Asia’s fast-growing market for consumer goods was a hotbed of M&A activity in April. CP All, owner of Thailand’s 7-Eleven chain, offered to pay $6.6 billion for supermarket owner and operator Siam Makro. The deal is the biggest takeover announced in Asia so far this year and the largest ever involving a Thailand-based company.

Unilever, one of the world’s largest consumer goods companies, offered to increase its stake in Hindustan Unilever, its publicly listed Indian subsidiary, to 75% by acquiring a 22.5% interest, in a deal valued at $5.4 billion. The firm is a manufacturer of soaps and detergents.

China’s Midea Group agreed to acquire the remaining 58.8% stake it did not already own in GD Midea Holding, which makes home appliances, including air conditioners and rice cookers. Midea Group is taking the company private in a deal valued at $3.2 billion, as part of a plan to list on the Shenzhen Stock Exchange. 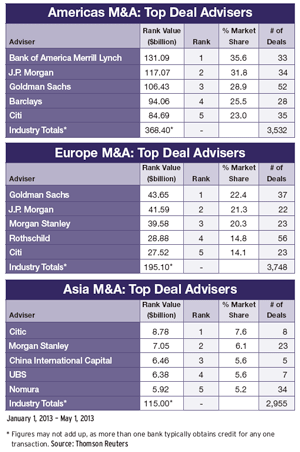