Global Finance sat down with Yves Zlotowski, chief economist of the economic research department of trade risk consultancy Coface, to get his take on the investment opportu-nities and challenges of emerging markets. 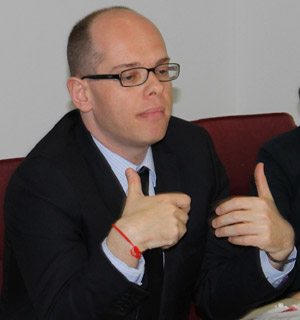 Emerging markets have matured to the point where they challenge the developed world for risk-adjusted returns, according to Yves Zlotowski at Coface. That change in relative circumstances is encouraged, of course, by the decline in fortunes elsewhere. Still, Zlotowski told participants in Global Finance ’s salon that governance in markets such as Brazil, China, India and Turkey has improved so dramatically in recent years that macroeconomic and political risk in those countries is now on par with, or perhaps lower than, that in some more economically developed countries, including Cyprus, Greece and other troubled members of the eurozone. He emphasized that governance in some emerging markets now approaches that of France and, when asked whether he thought France was the model for governance, the Frenchman drily responded: “I thought that was implied.”

LITTLE DOWNSIDE
Although Zlotowski concedes that GDP growth rates have fallen in many emerging markets, he points out that they still outpace those seen in Europe and North America. Yet risk of instability and inflation in the less developed world has been reduced dramatically, so that the downside to investments there is simply not what it used to be. Besides improved governance, the economist cites improvements in liquidity as a chief driver of risk reduction in emerging markets, noting that public debt levels now average around 35%, compared with 95% for advanced economies.

To Zlotowski, this explains why the sovereign debt and banking crises that have plagued the developed world have not been transferred to emerging markets, contrary to expectations a few years ago. “Seen from the eurozone, emerging markets are a safe haven,” he says. Not that the economist feels they pose no risk whatsoever. “I am a macroeconomist, so I have to find risk somewhere,” Zlotowski quips.

In fact, he contends China faces daunting challenges. The rapidly growing shadow banking system, which Zlotowski describes as “extremely dangerous,” defies Beijing’s efforts to gradually deflate an ongoing credit bubble. Nonetheless, he observes that the risk of a hard landing, at least in the short term, is borne mostly by Chinese companies, because consumers do not borrow nearly as heavily. The larger and longer-term concern in China, he says, is whether the government can maintain its legitimacy in the eyes of the public by rebalancing the economy in a way that raises living standards for rural as well as urban populations. “This is a huge issue,” he says.

Elsewhere in the developing world, Zlotowski is most impressed by countries such as Turkey and Brazil, that have embraced financial and economic reform and are “extremely pragmatic” about the process and goals involved. “There is a strong appetite there for improving governance.”

On the other hand, he said governments in many emerging economies, including those of Russia, Venezuela and many in the Middle East, face increasing pressure from their populations for change that their rulers still resist, and this tension leads to the risk of instability. “In these countries, citizens are demanding to be part of the economic and political life,” he noted. The economist has essentially written off Egypt because of the degree of ongoing turmoil in that nation. “The IMF calls and no one answers,” he points out.

Even in more stable emerging markets, Zlotowski warns that investors may be unpleasantly surprised by more failures like that of Dubai World in 2009, where the distinction between public and private ownership is blurred, and investors may therefore mistakenly assume that there is an implied government guarantee. “There are a lot of investor issues,” he notes.

Protectionism and capital controls also pose problems in a growing number of developing countries, and European banks are pulling back from trade finance there. “Basel III makes project finance unattractive,” Zlotowski notes.These developments raise the price of admission for foreign investors. However, he predicts that trade financing in the emerging world will become easier again as US, Japanese and Canadian banks fill the gap left by their European counterparts, and issues around protectionism will subside as EM growth stabilizes.