Recent easing of regulatory restrictions will increase offshore circulation of the renminbi and connect China with the rest of the world. 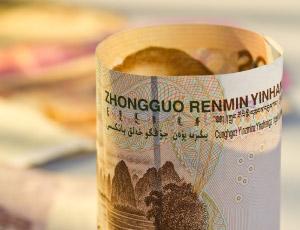 Smart treasurers and chief financial officers of multinational companies have sought ways to improve renminbi funding options and liquidity for some time. Yet, optimizing treasury management for the renminbi, despite the currency’s growing influence, has been stymied by a stubborn wall of restrictions.

Fortunately, regulators in China and Hong Kong have started acting in a more supportive manner. Their easing of controls, albeit gradual, on cross-border renminbi transactions within the past six months has led to developments that form a new phase in the internationalization of the currency—and in treasury management in China.

Last November, the People’s Bank of China gave the green light for certain key multinational banks (Citi, HSBC, Standard Chartered, Bank of East Asia) to form pilot programs with local and multinational companies to facilitate renminbi cross-border loans for their activities outside China. Standard Chartered was given an Rmb3.3 billion ($535 million) cross-border lending quota by the PBOC’s Shanghai branch to deploy a pilot program in collaboration with an unnamed Fortune 500 multinational manufacturing and technology company.

The pilot is designed to channel surplus renminbi capital in mainland China to fund renminbi-denominated activities overseas. It will allow the company to replace a traditional entrustment loan, with a bank as intermediary, with one where two parties sign a lending agreement directly, agree to an interest rate and manage the loan drawdown themselves. In other words, it allows direct treasury relationships between subsidiaries of a single company in dealing with what is likely to be one of the world’s leading currencies. If you think you’re hearing a satisfied sigh from corporate treasurers, you’re not mistaken.

OPTIMIZING TREASURY
In January, the State Administration of Foreign Exchange gave the green light for Standard Chartered to initiate a pilot program with Shell China, the mainland subsidiary of the energy giant. The pilot allows multinationals to set up foreign currency cross-border sweeping structures. This means Shell China can use its surplus cash for working capital needs through automatic sweeping of its onshore and offshore excess foreign currency balances to a master account.

Ultimately, the two pilots have a similar purpose—to connect treasury operations in China with the rest of the world. Commenting on the Shell project, Michael Vrontamitis, regional head of product management for Standard Chartered Hong Kong, who oversees both pilot programs, told Global Finance: “This gives companies a chance to bring China into the fold in terms of liquidity and treasury management. It also allows companies to use the dollars they have in China to fund China growth.”

The programs help companies manage their working capital on a broader scale—with the renminbi as an increasingly vital component. They can start to think about optimizing treasury structures with an eye to integrating the renminbi into their global liquidity strategies. For example, a company with a large presence in China and a high degree of renminbi receivables may have use for that renminbi liquidity overseas. A multinational subsidiary in China can now lend renminbi to the parent or related companies directly, allowing that company to settle its renminbi-denominated invoices.

This is no small matter. The use of renminbi for global trade and payments has grown rapidly since Chinese authorities began to liberalize rules governing the currency in 2009. According to HSBC, which provides a wide range of renminbi solutions encompassing cash management, payments, trade and receivables, 10.5% of China’s total merchandise trade was settled in renminbi last year. The bank forecasts that this share will rise to 30% by 2015.

HSBC is also engaged in a renminbi pilot with a global leader in power and automation technologies to facilitate cross-border settlements in China. It describes the solution it built with this company as a precedent-setting “gross-in/gross-out model” that eliminates foreign exchange exposure and optimizes liquidity management. Other multinationals in China will likely follow suit, eventually boosting circulation of the renminbi outside the mainland.

Citi China launched a multicurrency notional-pooling renminbi capability in May. Notional pooling helps treasurers manage cash in multiple currencies as a single position without altering FX exposures or having to perform FX swaps.

OFFSHORE CENTERS
Ex-China circulation of the currency is increasing on a motor of its own. According to a March quarterly survey of corporations regarding their renminbi transactions conducted by Standard Chartered, the majority of respondents anticipate growth in renminbi usage in the upcoming six months. They also expect to broaden the types of products they use. The most commonly used product is foreign exchange transactions, which are driven by hedging needs. The survey also revealed that a growing number of respondents—those with regional treasury centers—are warming to the idea of settling renminbi transactions offshore.

Moreover, some 53% of respondents expect that exports settled in renminbi will increase over the next six months, while 44% believed the same for imports. “This is in line with our view that renminbi outflows from the mainland via the trade settlement channel will more than offset flows back into China via the capital account,” says Kelvin Lau, a currency analyst at Standard Chartered. This will add to the trend of higher offshore deposits. Lau predicts that renminbi deposits in Hong Kong will reach between Rmb700 billion to Rmb800 billion by the end of 2013.

Regulators orchestrated the easing of cross-border restrictions to respond to this growth. In late April the Hong Kong Monetary Authority removed the last restrictions on offshore banks’ renminbi business. The most important change is the removal of a separate liquidity requirement for the renminbi,which should ease the need for aggressive renminbi funding. Banks in Hong Kong are now required to meet only an overall statutory liquidity ratio requirement of 25%, and renminbi positions can now be pooled with non-renminbi positions for the overall calculation.

There’s still a long way to go though. Most offshore settlements are conducted by European and US multinationals. The PBOC’s nomination of a clearing bank (ICBC Singapore) for renminbi in Singapore should make offshore settlements more attractive to Southeast Asian multinationals. In any event, the removal of trade barriers in Asean in the years ahead could mean that a new phase of offshore renminbi growth will kick in soon.

The renminbi is on the march—and increasingly, more multinationals will keep pace. 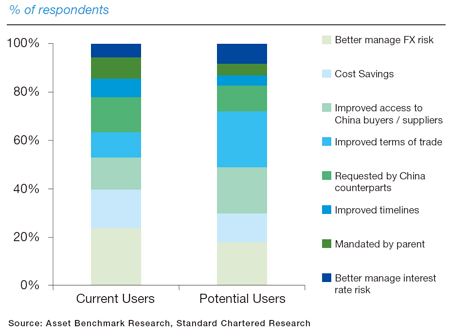