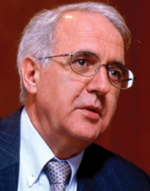 It’s the day after the company’s annual results bonanza, and Novartis CFO Raymond Breu is sitting comfortably in the Basle headquarters of the Swiss pharmaceutical company.

Breu has good reason to feel happy. Together with chairman Daniel Vassela, he’s just unveiled 2002 financials that show sales up 11% in point-of-sale currencies and operating income up 10%. What’s more, they’ve just sprung the news that Novartis has covertly built up a 32.7% blocking stake in cross-town pharma rival Roche. It’s that revelation—and debate over whether a takeover of the fellow pharma company is inevitable—that dominates Swiss news that day and the next.

But the brouhaha over the Roche demarche obscures a deeper, slower transformation that’s coursing though Novartis—and one that CFO Breu is at the heart of. For the 2002 results are the last that Novartis will be filing in Swiss francs. From the next quarter the company will report in US dollars, a reflection of an inexorable shift of gravity at Novartis—away from Switzerland and toward the United States. “It is a very clear process that we are going through,” says Breu. “And we have taken a number of steps that are also going in the same direction.” The company already reports quarterly and has made its peace with Sarbanes-Oxley.

Like pharmaceutical companies worldwide, Novartis is feeling the relentless magnetic pull of the US. “We have at the moment approximately 43% of our business in the US, and that share should increase still further,” explains Breu. “That is a priority for most of our businesses.”

Little wonder: World-class teaching hospitals and medical colleges have combined with unregulated drug prices to make the US a pill-popper’s paradise. Nearly one in every two drugs prescribed in the world is sold in the US. Some 45% of new drugs are discovered there.

Pharma watchers say Novartis has a good pipeline by industry standards, but it’s the need to develop ‘blockbuster’ drugs—products like its market-leading hypertension treatment Diovan that rack up $1 billion-plus in peak annual sales—that is exerting a transatlantic pull.

Last May Novartis said it was moving its global research headquarters from Basle, a university town set on the Rhine where Switzerland, France and Germany meet,  to Cambridge, Massachusetts.

But it’s not just brains that Novartis is hunting in the US; it’s money, too. The company has had a Level 1 listing on the NYSE, and Breu calculates that up to 20% of Novartis stock may now be in US money managers’ hands, a figure he aims to raise further still. “We want increasingly to have access to the largest capital market in the world,” says Breu. “If you want to focus on the US investor, then you have to play by the rules of those markets, and the rules are, ‘We want to see those numbers in US dollars.’” Most all of Novartis’s real competitors report in the greenback, he says.

In truth, the move also helps the company manage its own results better, by stripping out the effects of currency fluctuations. Converting dollar and euro-denominated sales to the Swiss franc—a small currency that’s often tossed around by tides of geopolitical sentiment—can cause headaches at HQ. Despite hedging, a strong Swiss franc depressed sale growth by 9% in Swiss franc terms in 2002 and slimmed 2% off operating income.

But US practices have their drawbacks. Posting earnings each quarter can create problems, especially in an industry with product cycles as long as those in the pharmaceutical industry. “The switch to quarterly reporting is a bit controversial sometimes because it may mislead management into short-term decision-making,” Breu says. “We resisted it for a while, but then investors in the US told us, ‘We will simply not look at you.’”

That’s already thrown up some conundrums for the board. Breu says that the recent decision to increase research expenditure by more than 20% for the next couple of years would clearly hit short-term profits for a payback that might take a decade. And even decisions over individual drugs can raise similar questions, says Breu. “Last year when we got the approval of Zelnorm in the US, we immediately said, ‘Here is another dilemma for us—should we maximize the short-term profit for 2002, or should we maximize the value of Zelnorm over its patent life?’”

Zelnorm, a treatment for irritable bowel syndrome, had gotten approval from US regulator the Food and Drug Administration earlier than expected—halfway through the financial year. The sales support and advertising program associated with its rollout carried an additional $240 million price tag—one that would have to be paid in financial year 2002. “It was very, very clear what we had to do,” says Breu. “We went to certain shareholders and explained to them that we wanted to maximize profits for the long term.”

The strategic decision to adhere to new US corporate governance standards also meant resolving potential conflicts. For example, under the Sarbanes-Oxley Act external auditors have to be appointed by the audit committee; in Swiss law it’s the shareholders’ meeting that has the right to hire. Novartis got round this by having the audit committee make a recommendation to the shareholders’ meeting. “We took the spirit of the law and asked how can we implement it in the Swiss legal environment,” says Breu. “You can always find a solution.”

Accommodating Sarbanes-Oxley is made easier by the fact that Novartis had already begun to move away from the notoriously clubby style of doing business in the top echelons of Swiss corporate life. Breu points out that 10 out of 12 board directors are independent, though it’s fair to say they’re still overwhelmingly Swiss. That’s changing, too. Two proposed new board members are a German and an Indian-born naturalized American. The executive committee has four Swiss members against three non-Swiss, and the new man in the key role of pharmaceuticals research, Mark Fishman, is a Yale and Harvard Medical School graduate. Business group heads are overwhelmingly international. “More and more non-Swiss are moving into key management positions, and more and more non-Swiss are on the board of directors,” says Breu, whose previous employment at Sandoz took him to London and New York, but who remains resolutely Swiss. “We are being reduced by natural attrition.”

But it’s that kind of process that fuels the worries that regularly resurface over whether Switzerland’s corporate titans are set to flee the nest. With five out of the world’s top 100 companies headquartered in a country of 7 million inhabitants, Swiss business punches well above its weight. But a litany of woes and scandals at ABB, Swiss Life and the former Swiss Air have made for a febrile attitude toward the business elite in a country accustomed to the good times.

Those fears bite deepest in Basle, home to Switzerland’s chemical and pharma industries since Johann Rudolf Geigy-Gemuseus began trading there in dyes and drugs in 1758. The tramstop outside Novartis’s headquarters still bears the name of Sandoz, the company that merged with Ciba-Geigy to form Novartis in 1996. Breu acknowledges that remaking the company along American lines can cause tensions among domestic investors and the Swiss public at large. “The general public especially may be a bit concerned,” he says. “But there is no danger: We are a global pharmaceutical company where the largest market is in the US—but the headquarters will stay in Switzerland.”