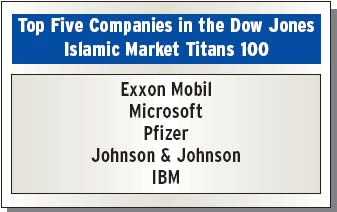 As timings go, it could be better.With the United States preparing for war in Iraq, financial information provider Dow Jones launched a family of new Islamic indexes at the end of February—including one that lists blue-chip American stocks.

Since 1996 they’ve grown at an annual clip of between 10% and 15%, according to Failaka International, a Chicago-based provider of information on Islamic funds.That compares to less than 5% annual growth in general equity funds over the same period.

The Islamic Market Titans 100 offers, says Dow Jones, “easy access to the largest and most liquid global companies that meet requirements for non-financial, low-debt and social ethical markets.” Maybe, but with the US index headed by Exxon, Microsoft, Pfizer, Johnson & Johnson and IBM,how keen will Muslim investors be on what’s essentially a roll call of corporate America? Runman Faruqi, CEO of the Londonbased Institute of Islamic Banking and Insurance, says Islamic funds have been moving away from America since 9/11.“There’s been substantial diversification out of American assets,”he says.“A lot of funds have moved back to the Middle East or to places like Malaysia and even China.”

Faruqi, who estimates all forms of Islamic investment worldwide at around $250 billion, says there are concerns these assets may not be safe in the US.“These days there is a very thin line between what’s considered to be Muslim finance and what the US classifies as terrorist finance,” he says. “There is a fear the distinction may get even more blurred.”