International companies have flocked to India to carry out non-core operations, taking advantage of the wide availability of well-trained English-speaking professionals—cheap and well-trained, to be more precise. With salaries for Indian business school graduates generally only 10% to 20% of what their counterparts command in New York and London, companies are finding it increasingly difficult to resist the cost-savings factor.

That hunger for cost savings is driving wild growth in the Indian outsourcing industry. India’s National Association of Software and Service Companies (NASSCOM) estimates that, after growing by 59.1% in 2002-2003, the IT-enabled services (ITES) and business process outsourcing (BPO) industry will grow another 54%, to $3.6 billion, in 2003-2004. According to finance minister Jaswant Singh, the IT software and services industry accounted for 2.4% of GDP and 20.4% of exports in 2002-2003. Within five years it is expected to grow to 7% of GDP and 35% of exports.

Recent performance of the industry has been nothing short of breathtaking. The IT software and services industry posted a compounded annual growth rate of 43% over the past five years, accounting for $12.7 billion in turnover and $10 billion in exports last year. The BPO industry alone is expected to produce revenues of as much as $60 billion by 2012, after posting a mere $565 million in revenues in 1999-2000. 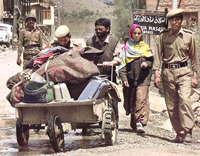 The Education Factor
“India benefits from having a large pool of well-educated, well-trained, English-speaking, relatively modern engineers, finance professionals and specialists in quantitative disciplines,” says Kristin Lindow, lead analyst for India at Moody’s Investors Service in New York, noting that while the BPO work force is still a relatively small segment of the population, numerically it is quite large given the country’s population of more than 1 billion.

Contributing to sector expansion prospects is the growing number of Indian university graduates who enter the sector each year, bringing with them credentials that are superior to those of many BPO workers in the US and Europe. Higher-education enrollment in India has been growing by more than 7% annually for several decades, with some 8 million students enrolled in graduate and post-graduate programs in 2001.

Many students attend the government-funded Indian Institutes of Technology (IITs) and the Indian Institutes of Management (IIMs). Keen to encourage more potential students onto the courses, the government slashed annual tuition fees for post-graduate programs at IIMs by 80% to Rs30,000 ($660). And the Confederation of Indian Industry is trying to encourage universities to introduce courses aimed specifically at preparing students to enter the BPO market.

India will need to pump out more graduates if it is to maintain its momentum. Few graduates view BPO as a long-term career, despite the fact that call center employees—the lowest-level BPO workers—earn annual salaries of some $5,000 in a country where the average income is closer to $500. The rate of attrition at call centers, where many workers hold MBA degrees, is as high as 35%. The work can be monotonous, and companies offer little scope for professional development.
Services worth $300 billion to $400 billion are already being moved offshore or outsourced abroad by US companies. Speaking at the NASSCOM 2004 India Leadership Forum in Mumbai, McKinsey Global Institute director Diana Farrell said global offshore outsourcing would grow to $164 billion by 2008 compared with just $17 billion in 2001, and some 3.3 million US service jobs would go offshore by 2015.

The Numbers Game
For the nations winning the business, the numbers are mouthwatering. For opponents of outsourcing, they are horrifying. While the list of US multinationals that have already outsourced back-office operations to India includes AOL, Delta Airlines, IBM, Sprint and American Express, political resistance to outsourcing is growing. The US Senate in January passed a bill that prohibits government contractors from outsourcing overseas, with several US states considering similar laws. The situation has been exacerbated by the US downturn and political rhetoric during this year’s presidential election. Some Europeans are also riding the anti-outsourcing wave, with UK labor unions joining forces to demand an independent inquiry against offshore outsourcing by British firms.
The resistance has influenced some companies to reconsider their strategies. UK-based Co-operative Financial Services publicly stated that it would not outsource abroad and would instead increase staff at its UK call centers this year. Others, including Lehman Brothers and Dell, have moved their customer support functions back from India to the US.

Outsourcing supporters contend that moving low-end back-office jobs abroad supports the creation of jobs in the US that require higher-end technical skills. Opponents are not buying the argument, but they are thwarted by the economics—and by corporate pragmatism. More than half of the CEOs questioned for the Economist Intelligence Unit’s annual CEO Briefings Survey on corporate priorities for 2004 said increased outsourcing and offshoring would be the main critical force changing the global marketplace over the next three years. Another survey taken at an outsourcing summit held by US-based Gartner Research last year showed that 80% of respondents indicated that the potential political backlash would not hinder their offshore outsourcing plans.

Turbulence Ahead?
According to the 2003 E-commerce and Development Report by the United Nations Conference on Trade and Development (UNCTAD), of the 3.3 million jobs that will be generated by global offshore outsourcing operations by 2015, more than 2.3 million will be created in India. The country has captured nearly 20% of the global offshore IT services market, and growth prospects remain healthy.
However, it is already witnessing the arrival of other lower-cost competitors on the scene, including China, Bangladesh and Vietnam. To maintain its lead, analysts say, India must now aim to provide higher-end services and outsource lower-end tasks—including customer support and data processing—to its neighbors. Call centers currently account for nearly 70% of India’s BPO industry in terms of revenues, making the sector more sensitive to price competition from cheaper labor markets.

The arrival of several global financial institutions is helping to take India’s BPO sector to another level by offering more technical services, including equity research and underwriting services. US investment banks, for example, can pay a junior analyst in India an annual salary of around $20,000 instead of some $85,000 in New York.

Goldman Sachs announced in February that it would set up a back office support center in Bangalore this year, where it expects to employ 250 workers. JPMorgan Chase and Morgan Stanley are among other investment banks that have established equity research units in India. JPMorgan Chase also operates a commercial banking back office unit in Mumbai.

But India must continue to upgrade its infrastructure if it is to maintain its position as a global BPO giant. “Infrastructure is still relatively backward, and it’s not only telecom,” says Moody’s Lindow. “Companies that have grown large there rely heavily on their own electricity-generating capacity. There are also transport network bottlenecks and bureaucratic bottlenecks. The bureaucracy has been simplified, but it’s still rather cumbersome,” she notes.

In comparing India with China, a major BPO competitor, a Standard & Poor’s research report authored by Joydeep Mukherji notes that the gap in public sector investment in physical infrastructure is one of the most glaring differences between the two countries. “China’s rapidly improving infrastructure of roads, railways, ports, and ample electricity is in sharp contrast with India’s dire shortage of all of the above,” says the report.

There is still considerable room for growth. “We are just toddling; hence we should stop terming ourselves as the IT superpower,” said NR Narayana Murthy, chairman of Infosys Technologies, at the NASSCOM India Leadership Forum. “People tend to exaggerate India’s size in the IT market,” says Lindow. “NASSCOM says the country accounts for only 2% of the world’s IT sector at this point, and that includes software, hardware, back office and consulting. But that also means that there’s tremendous room for growth,” she adds.

The rating action was motivated mainly by a reduction in external payments vulnerability, with official foreign exchange reserves rising by $30 billion over the past year to $100 billion—equal to more than twice India’s external obligations falling due this year. Gradual structural reforms and market liberalization also support this year’s expected 8% GDP growth.

“India still has government deficits of 9% of GDP, which are among the highest of any of our sovereign ratings,” says John Chambers, managing director of the sovereign ratings group at Standard & Poor’s. “They have a very serious fiscal problem that needs to be addressed, and they also have impediments in their economy. They’re growing smartly now, but these things could be a hindrance to long-term growth,” he says.

Nevertheless, the country is enjoying its current economic surge, with agriculture, manufacturing and services all contributing to GDP expansion. On the political side, it is also enjoying a rapprochement with Pakistan and the prospects for early national elections.