While US corporate bondmarket participants expect overall issuance to decline in 2004 as interest rates go up, high-yield issuance likely will remain strong and could even increase slightly.

A healthier economy will make it more attractive for companies to issue bonds in the high-yield market as their credit outlook improves, according to a survey by the Bond Market Association, with offices in New York,Washington and London.

“Thanks to a stronger economy, which began to exhibit measurable progress in the second half of last year, our members are expecting moderately higher interest rates during the course of 2004 and a corresponding expected drop in bond issuance,” says Micah S. Green, president of the association.

The past two years witnessed record issuance in the bond markets, and it is unrealistic to expect that to continue, according to Green.The association represents securities firms and banks that underwrite, trade and sell debt securities in the US and globally.

Association members forecast that corporate bond issuance will drop about 31% this year compared with 2003, but that high-yield issuance will rise 2.5% to $125 billion.

Federal Reserve policy is expected to remain accommodative for some time, despite the Federal Open Market Committee’s decision to drop the phrase “considerable period” from the text of its press release following its last meeting.

“As much as we believe that rates should and will move substantially higher by year-end, it will ultimately be impatient bond investors rather than a patient Fed that will pave the way to higher rates,” says Kenneth L. Hackel, chief US fixed-income strategist at Merrill Lynch in New York.

Fed officials were growing increasingly uncomfortable at the prospect of making an explicit time guarantee regarding Fed policy, Hackel says. By adopting a posture that “it can be patient in removing policy accommodation,” the FOMC did not dramatically change the substance of its prior message, but successfully extricated itself from the quandary it had previously put itself in, according to Hackel. Now the onus for policy changes is explicitly on economic data, as it should be, he says. 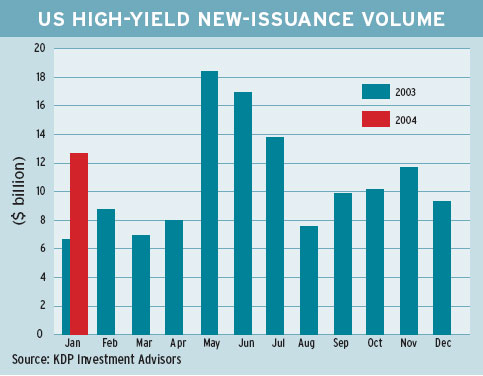 The company said the refinancing would allow it to reduce its interest expense and extend the maturities of its debt. The senior notes bear interest at 6.5%, and the senior subordinated notes have a 7% coupon.The issues were privately placed and were not registered under the Securities Act of 1933.

As part of the refinancing, United Rentals replaced its senior secured credit facility with a new facility and agreed to repurchase up to $860 million of outstanding 10.75% senior notes due in 2008.