Is tech finally back? The signs point to 2004 being the best year since 2000 for technology corporate spending, initial public offerings and venture capital funding. The near-50% jump in the Nasdaq last year, a rebound in corporate earnings,a moderate late-2003 snap-back in venture financing and tech IPOs, and increased forecasts for capital spending on technology are all signaling the return of technology. A brightening global economic picture is also infusing tech-market participants with confidence.In an early February conference, the G-7 countries—the United States, Japan, Germany, France, United Kingdom, Canada and Italy—declared that the global economic recovery has “strengthened significantly” in recent months.

Don’t expect this bull market in technology spending and financing to be like the gold-rush period of 1998-2000, though.Tech growth will return in a more stable and sustainable form and will have decidedly different characteristics from the dot-com-bubble era, say tech analysts, vendors and buyers.They also are wary of previously dashed hopes for tech recoveries in the past few years. So expectations are measured.

Companies have largely held off on making big technology equipment and service purchases since the Internet bubble burst and Y2K spending subsided in 2000.Weak global economies, tepid customer demand, concerns over terrorism following the September 11, 2001, attacks, Iraqwar worries and corporate financial scandals all contributed to companies cautiously keeping a lid on spending p l a n s . That drought will likely come to an end in 2004 now that corporate profits have bounced back and companies feel more optimistic about making strategic technology investments again, analysts and managers say.

Research firms are predicting anywhere from a 3% to 8% increase in information technology spending in 2004.Though a far cry from the double-digit increases of the late 1990s, that’s a healthy rise. IDC, based in Framingham, Massachusetts, expects global IT spending to grow by 5% this year. San Jose, California-based Gartner Dataquest in a December report forecast that worldwide IT spending would increase 5.1% in 2004 to $2.42 trillion. Hardware spending will rise 5%, software 7%, IT services 4.8% and telecom 5.3%, Gartner Dataquest predicts. 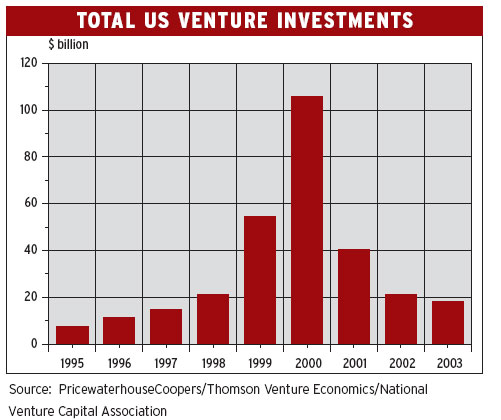 Hardware in particular will benefit from the need for firms to replace or upgrade out-of-date equipment.There are a lot of four- and five-year-old servers and desktop computers still in service at many businesses.They are going to have to be replaced sooner or later, analysts and vendors say.Software is not being left out. In a series of fourth-quarter earnings reports released in January, several software firms indicated that orders are beginning to firm.

Many analysts, consultants and vendors caution that technology spending won’t be a rising tide that lifts all ships. Instead, growth will be more moderate, focused on specific initiatives and vary from industry to industry.

IDC predicts the strongest growth in IT spending in the next few years will be in the financial services and consumer markets, partly driven by compliance with new regulatory requirements, such as the Sarbanes- Oxley Act in accounting, the New Basel Capital Accord (Basel II) in banking and the USA Patriot Act.

In the Internet bubble era, many companies invested in the hottest,latest technology features and must-have Internet initiatives.Now businesses focus scarce funds on technologies that can quickly deliver real productivity gains, efficiencies and returns on investment.

“Customers are clearly looking for hard evidence of a return on investment. If they don’t see a return on investment within 12 months, they won’t buy,” says Taussig, whose young company posted a 170% increase in revenue in 2003, with $71.7 million. Callidus Software expects revenue to rise another 33% to 40% in 2004, to between $95 million and $100 million.

Taussig is putting his money where his mouth is by taking a big chunk of that revenue and pouring it into research and development. Callidus plans to boost R&D; spending by nearly 40%,to $18 million this year versus $13 million in 2003.The goal is to continually innovate in order to sustain that rapid revenue growth.Other companies are also taking that approach.

Tom Sanzone,CIO of Citigroup’s global corporate and investment banking group, says his bank’s technology initiatives this year are focusing more on using technology creatively and strategically to boost revenue.A couple of years earlier the emphasis was more on utilizing technology to make the organization more efficient.“It’s evolving to be more weighted on the top line,” he says.

“It’s a product of improving market conditions,”Sanzone continues,“which improves the bottom-line performances of the [bank’s] businesses, which allows them to invest.” Citigroup declined to detail its technology-spending budget, but officials say spending will increase this year for the first time in two years.The renewed focus on the top line is a recurring theme across the technology landscape, which is good news for big technology vendors. “As the global economy improves and buyers return their focus to increasing profits through revenue growth, big-ticket IT purchases will gradually start to reappear,”Anne Lu, senior analyst for IDC’s Worldwide Vertical Markets research program, wrote in a February report.

Tech IPOs and M&A; Are Back

As IT expenditures rise and companies and investors once again pursue growth instead of just survival, opportunities are created for private technology companies to once again enter the public markets and find receptive audiences.

In the first half of 2003 the technology IPO market, like the new-issue market as a whole, was almost dead, with only one company, semiconductor firm FormFactor, going public in the US.There was a rebound in the second half, with 17 tech IPOs. In total the 18 technology companies going public in 2003 on US markets, including foreign firms, raised $2.4 billion, or $131.5 million each, according to IPO Monitor, a Los Angeles-based company that tracks the IPO market.The 19 new issues in 2002 raised a much healthier $4.6 billion—or $243.6 million each.

Callidus Software was one of the companies to benefit from the late 2003 snap-back in the tech-IPO market.It first issued shares to the public in late November, several months ahead of the schedule its investment bankers (Citigroup was the lead underwriter, while Lehman Brothers and Piper Jaffray were the co-managers) had originally set. The IPO raised $70 million for the company. 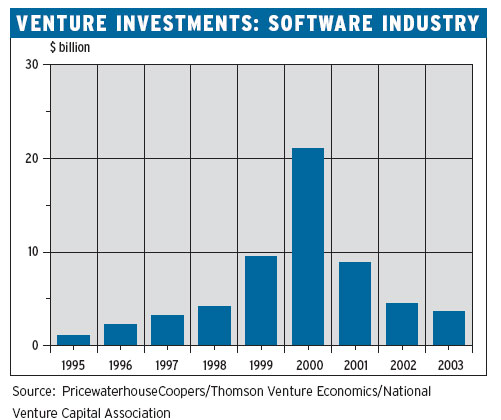 “Market conditions were positive, so we accelerated it,” says Taussig.The CEO adds that he wanted his company to go public in the early stages of the tech-IPO recovery in order to obtain more visibility in the marketplace and be associated with the higher-quality (i.e., profitable) firms that tend to sell shares to the public in the earlier stages of a bull market.Only two enterprise software companies floated new issues in the US in all of 2003.Taussig says bankers told him that six or seven software firms could launch IPOs this year.The tech-IPO momentum has continued into the start of 2004, with four technology-related new issues in the first half of February alone:Atheros Communications, which makes integrated chip sets for wireless networking equipment; AlphaSmart, which sells educational electronic devices to 7,500 school districts; Staktek Holdings, a maker of memory modules for computer servers and storage systems; and Bancorp Bank, an Internet- only bank. And this year one of the most anticipated tech IPOs in years could single- handedly raise more than last year’s total. Bankers and investors are eagerly anticipating the IPO of Internet search engine firm Google, which has achieved iconic status in the Web world. Google could take in $4 billion or perhaps much more when it goes public sometime this year.

The sheer number of tech companies going public is likely to increase as well.“If you look at the IPO pipeline, there is a big increase in the number of technology names,” says E. Reilly Tierney, an analyst with Fox-Pitt Kelton who covers Wall Street’s biggest investment banks. That pipeline includes Salesforce.com, which sells customer relationship management software on a subscription basis to big companies around the world; SPS Spinco, a spin-off of Motorola’s semiconductor business; and Motive, which licenses self-help software. There are signs of life in Europe as well. On January 30 French Internet firm Iliad made a big IPO splash, with its shares gaining 30% on their first day of trading on the Paris stock market.The IPO helped revive a French IPO market that had been largely dormant for three years and showed rekindled investor appetite for technology shares in Europe. Iliad, the parent of Internet services provider Free, raised about €94.5 million.The offering was 28 times oversubscribed by institutional investors, reminding market participants of the red-hot technology IPOs of the 1990s. Analysts say the offering’s success opens the door for more tech IPOs in Europe in the months ahead.A dozen or so new issues are possible.

Analysts also see a rebound in technology merger and acquisition activity.“The tech companies are feeling their oats again and are not afraid to do deals,”Tierney says.As global economies, corporate earnings and stock markets continue to recover, companies are becoming more aggressive in pursuing both strategic and growth-oriented acquisitions. Rising stock prices, in particular, give more companies the valuable currency needed to make acquisitions. And the expected rebound in IT spending boosts the attractiveness of technology firms as acquisition targets. Santa Monica, California-based investment bank Montgomery & Co. forecasts a 50% increase in M&A; activity during 2004.

On February 9 Juniper Networks,the second-biggest network gear maker behind Cisco Systems, announced it would buy network security company NetScreen Technologies for about $3.3 billion in stock. The offer represented a substantial 50% premium over NetScreen’s share price before the acquisition announcement.

The increase in IT spending,technology stocks (the Nasdaq as of February had nearly doubled since its October 2002 lows),tech IPOs and tech mergers and acquisitions is beginning to fuel venture capital investment that’s been moribund since 2000.Venture capital is critical to the technology market because it finances the development of innovative technologies, fosters the growth of young companies, allows early investors to get a return on their investments, and facilitates the flow of capital.

“Opportunities are presenting themselves in a variety of sectors, and venture capitalists are finding talented, dedicated management teams to build sustainable businesses. Nevertheless, venture capitalists remain selective as they responsibly deploy their investors’ money,” says Mark Heesen, president of the National Venture Capital Association (NVCA),which represents more than 450 venture capital and private equity firms. That selectivity has led to a continual shift in investment from early-stage companies, the hallmark of the high-flying dot-com era, to more estabestablished companies with proven business plans or to firms that at least have previous venture capital investments under their belts.

In the late 1990s many venture capitalists were fixated on dot-coms because that’s what was hot and that’s where quick money could be made with a minimal investment. More established, traditional areas such as enterprise software were often shunned. Callidus Software’s Taussig says that some venture capitalists he talked to at that time questioned why he was bothering to build an enterprise software company when he should instead be in a dot-com that could go public fast.

“It takes five to six years to build a substantial software company.You can’t build one overnight,” says Taussig, whose company has poured more than $60 million of research and development money into building its popular software technology.Fortunately for Callidus, it was able to find VCs willing to invest in something that takes time. Before going public, the company took in a total of $86 million from venture capitalist firms, including Californiabased Crosspoint Venture Partners.

Market observers believe that the venture financing market may have bottomed out in the first quarter of 2003, when investments totaled only $4.2 billion in the US, according to the MoneyTree Survey by PricewaterhouseCoopers, Thomson Venture Economics and the NVCA.

The venture capital momentum continued into the start of 2004 along with the IPO market’s renewed energy.“Venture capitalists are feeling more confident about the future. Commercial IT users are beginning to buy again, and exit avenues are opening,”says the NVCA’s Heesen.Maybe tech really is back.