RECORD TRADE DEFICIT: A SIGN OF STRENGTH OR WEAKNESS? 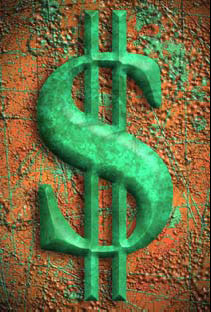 After two years of a slumping dollar, one could be tempted to look for signs of improvement in the gaping US trade deficit. Look again. While exports have increased, imports are growing even faster. The overall trade deficit soared to a record $489 billion last year, and the imbalance in merchandise trade reached 5% of gross domestic product.

Some economists say the wider trade gap is a sign of strength. Growing imports reflect an improving economy and consumers with money to spend. However, there are some good reasons to worry.

The biggest concern is that the US is beholden to foreign investors to finance the deficit. Fed chairman Alan Greenspan warned Congress in February that foreigners already hold so much dollardenominated debt that they could reach a point where they are less willing to take any more. That could spell higher interest rates and a possible dollar crisis.

And it's not only the big picture that's troublesome. A close look at the components of the deficit is also unsettling. The US deficit in high-technology products, for example, jumped 65% last year to $27 billion. And with 2004 shaping up to be the best year since 2000 for corporate spending on technology (see cover story, page 19), the high-tech deficit could balloon even further.

The European consortium Airbus delivered 305 commercial aircraft in 2003, topping Boeing for the first time. And pharmaceutical imports rose, as Americans turned to Canada and other countries as a cheaper source for their medications.

While there is nothing like a good bargain, politicians are pouncing on the fact that US jobs are being shipped overseas. There is a danger in this presidential election year that the protectionists will gain the upper hand and derail the global recovery. A further decline in the dollar may help, but it's not a panacea.