Newsmakers : Around The World 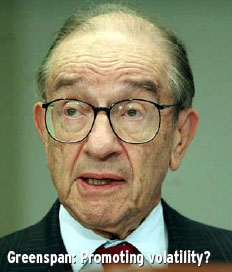 Federal Reserve chairman Alan Greenspan has turned the English language into an instrument of monetary policy, analysts say.What is the difference between being patient and waiting for a considerable period, they ask?

Fed governor Ben S. Bernanke told a meeting of the American Economic Association in January that there was a time when central bankers did not talk to the public. Montagu Norman, governor of the Bank of England for a quarter of a century after World War I,was notorious for being reclusive, Bernanke said. Norman lived by the maxim,“Never explain, never excuse.”

In contrast to this tradition of secrecy, central banks around the world have become noticeably more open and transparent over the past decade or so. As public servants whose policy actions affect the lives of every citizen, central bankers have a responsibility to give the public full and compelling explanations of the rationales for those actions, Bernanke said.

“Watch what we say, not what we do”has become the motto of US central bank policy, says David Gilmore, partner and economist at Essex, Connecticut-based Foreign Exchange Analytics. By the time the Fed finally gets around to acting, it has telegraphed its move so far in advance that investors would lose their shirts if they waited for traditional policy moves, he says.

But monetary policy by message, under the guise of transparency, creates more volatility than policy by action, Gilmore says. Language is not science. Words have multiple meanings and alter under a variety of intonations.

Take the Fed chief’s semiannual testimony to Congress in February.“It must have been hard for Greenspan to say with a straight face that if Asian central banks stopped supporting the dollar with currency intervention that the impact on the bond market would be minor and absorbed quickly,” Gilmore says.