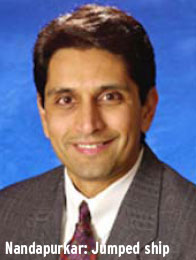 Satish S. Nandapurkar, a former military officer in the US Air Force, dropped a bombshell on January 21, when he resigned as managing director, products and services, of the Chicago Mercantile Exchange to become CEO of Eurex US. The CME could be forgiven for feeling like the cartoon character Pogo, who declared, “We have met the enemy and he is us.”

As head of the first foreign-owned exchange to trade on US soil, Nandapurkar is leading the European assault on Chicago’s famed trading pits at the Merc and the Board of Trade.

On Sunday night, February 8, the German- and Swiss-backed Eurex launched the first major derivatives exchange to open in the Windy City in 31 years. The TV antennas atop the Sears Tower, the home of Eurex US, were aglow in green and blue lights, the corporate colors of the European invader.

The local exchanges were in no mood to celebrate, however, after battling for months to keep the allelectronic exchange out of the city once known as Hog Butcher to the World. The frantic waving, shoving and shouting that goes on in the pits is another way of life that could be threatened.

With the lowest sustainable prices in the market, Eurex US is offering customers what they want—lower costs and more growth, Nandapurkar says. The exchange will allow customers worldwide to access its network under US regulation with coverage in all major time zones. Eurex hopes eventually to offer a single trading and clearing system for US and European derivatives.

Meanwhile, the Merc faces a new threat this month, when another European futures exchange, Euronext.Liffe, plans to list contracts that compete directly with the CME’s popular eurodollar futures. Not to be outdone, the Board of Trade says it will seek approval to offer German government-bond contracts to compete with Eurex.