The surge in merger activity late last year continued in early 2005, with a string of large takeovers in the US, including Procter & Gamble’s $57.5 billion purchase of Gillette, which will expand what is already the world’s largest consumer-products company.

P&G; agreed to pay an 18% premium to acquire Boston-based Gillette, which is best known for its razors and shaving cream, as well as Duracell batteries.

US telephone company SBC agreed to buy its former parent AT&T; in a stock-swap transaction valued at about $15 billion, plus a $1 billion special dividend.

Seven “baby Bells” were split off from AT&T; in 1984, but only three remain following consolidation in the industry. 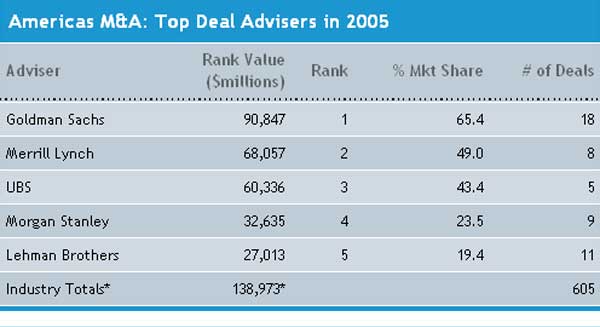 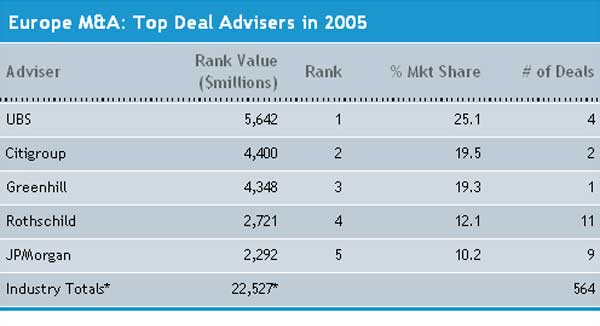 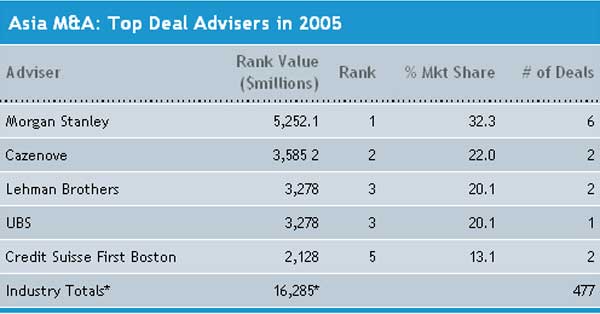 Source: Thomson Financial Securities
* Figures may not add up, as more than one bank typically obtains credit for any one transaction.

MetLife agreed to buy Citigroup’s Travelers Life & Annuity unit for $11.5 billion in a combination of cash and common stock. The acquisition would make MetLife the largest individual life insurer in North America based on sales.

MetLife and Citigroup also plan a distribution partnership, whereby MetLife products will be available at Citigroup branches and other Citigroup businesses, including Smith Barney.

In the media sector, Rupert Murdoch’s News Corporation launched a $6.9 billion tender offer to acquire the remaining 18% stake it did not already own in New York-based Fox Entertainment.

European and Asian merger activity has been more restrained so far this year, although several significant transactions took place in January.

Aggregate Industries, which operates 142 quarries in Britain and the US, says the company’s directors recommended the offer to shareholders.

Holcim says the purchase will strengthen its position as an integrated supplier of building materials. It forecast that the transaction would generate annual cost savings of about $85 million by 2007.

Holcim already held a 14.7% stake in the British company.

The transaction follows the recent $5.8 billion takeover of London-based RMC Group, a construction materials manufacturer and retailer, by Mexico-based Cemex.

The transaction is the largest foreign investment in the South Korean financial industry.

Korea First Bank is 49% owned by US equity fund Newbridge Capital and 51% by the South Korean government and the state-owned Korea Deposit Insurance Corporation.

Standard Chartered plans to pay for the acquisition by issuing new shares and through other funding sources.