Gordon Platt In the biggest offering of high-yield debt in the US market since July 2003, Intelsat Bermuda sold $2.55 billion of notes in a three-part private placement.

The global satellite operator is being taken over in a $3 billion leveraged buyout by a group of private-equity firms. 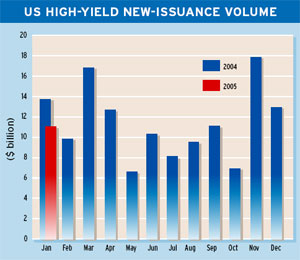 The debt offering was delayed for a month due to a malfunction of one of the company’s satellites, known as Americas-7. The company provides satellite communications services in more than 200 countries.

Total US issuance of high-yield corporate debt fell to about $11 billion in January, from $13 billion in December 2004 and $18 billion in November 2004, according to KDP Investment Advisors, based in Montpelier, Vermont.

The biggest individual issue in January was the private placement of $1.4 billion of senior notes by Novelis, the world’s largest maker of aluminum rolled products, as well as the biggest recycler of aluminum beverage cans.

Novelis, which was spun off as an independent company by Montreal-based Alcan in January, says proceeds from the offering will be used to repay debt issued to its former parent.

Alcan, a global leader in aluminum and packaging, has 73,000 employees and operating facilities in 56 countries. It says the spin-off of Novelis will achieve the separation of competing businesses that Alcan agreed to in order to obtain antitrust approvals for its acquisition last year of French aluminum produce Pechiney.

Novelis, with annual revenue of $6 billion, has 37 operating facilities in 12 countries and more than 13,500 employees. 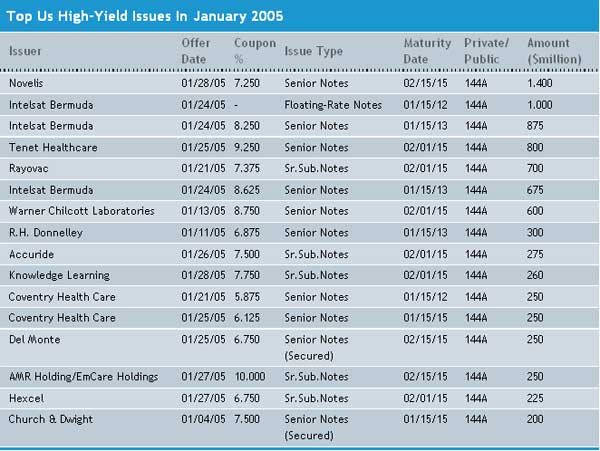