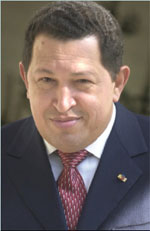 Venezuelan President Hugo Chávez has few friends left these days, as his moves to silence opponents have raised eyebrows in the international community. Yet, with Venezuela still a leading oil producer, Chávez is using the oil card in his favor.

When he hiked royalties paid to the government by foreign joint venture partners late last year, to 16.67% from 1%, few companies challenged the move lest they risk being given the boot by the increasingly authoritarian regime. High oil prices softened the blow.

Partners were, nevertheless, disturbed that the hike came without warning and was announced during a long holiday weekend when many company executives were out of town. For political observers, it signaled Chávez’s growing discretionary treatment of oil sector partners, exacerbated by the fact that he has also taken it upon himself to set strategies for the once-autonomous PDVSA state-owned oil company.

More recently, the government unilaterally halted work on development of the Corocoro offshore oilfield, claiming that partner ConocoPhillips had not complied with terms of an earlier contract. The deal was revived, but only after a meeting between ConocoPhillips CEO James Mulva, PDVSA chief Rafael Ramirez and, of course, Chávez himself.

Venezuela’s oil output keeps sector executives smiling even as Chávez plays hardball by his rules. PDVSA’s proved oil reserves of 77.2 billion barrels are the largest outside the Middle East. It is also one of the top oil exporters to the US market, where it owns Citgo Petroleum. PDVSA hopes to boost output to 3.4 million barrels a day this year, up from last year’s 3.1 million barrels a day.

“We have entered the year in which we will deepen the complete rescue of our oil sector sovereignty,” Chávez announced ominously during a ceremony in January to appoint PDVSA’s top management team. He added that the company will be the primary engine for what he calls Venezuela’s “leap forward”.

Once his plan is complete at home, Chávez’s vision calls for unifying all Latin American state-owned oil companies under a single umbrella firm. The emperor may have no clothes, but he certainly has ambition.