What happens when you wind a coil spring very tight and suddenly let it release? That is a question that analysts and participants in the foreign exchange carry trades are asking. They are hoping that it is possible to unwind massive carry-trade positions without triggering a shock to the global financial system.

Carry trades, which involve borrowing in a low-interest-rate currency and investing the proceeds in a higher-yielding currency, have had an amazing run since last fall, but they hit a brick wall in late January, according to a report by the global currency strategy team at Barclays Capital, headed by David Woo in London.

The magnitude of the Japanese yen-funded carry trade has reached levels that could raise concerns about systemic risks and the possibility that the unwinding of positions could dangerously feed upon itself, the report says. It estimates that carry positions have now reached about $34 billion, which is their highest level since the Russian financial crisis in 1998.
The fact that a relatively minor data release in the grand scheme of things—a weaker-than-expected Australian consumer price index—triggered a big sell-off in carry trades in January suggests that it is foolish to ignore the possibility that overcrowded positions can suddenly blow up without a major change in the macro-economic environment, according to Barclays Capital.

“While we think the macro environment will likely remain benign for carry trades for a little while longer, the risk-reward tradeoff has deteriorated,” the report says. A similar shift in risk-taking appetite triggered a sudden plunge in global financial markets in the middle of last year, particularly in emerging markets, although a subsequent rebound emboldened market participants to return in force to carry trades last October and November.

The weakness in global equity and bond markets in late January, the sell-off in many emerging-market currencies and the recent gains of the Japanese yen and the Swiss franc depict a scenario of the unwinding of carry trades, says Marc Chandler, global head of currency strategy at Brown Brothers Harriman in New York.


“One significant fundamental development in recent weeks has been the shift in view of Federal Reserve policy,” Chandler says. Judging by the performance of federal funds and eurodollar futures, the market previously was confident of a Fed rate cut in the first half of this year, he says. The consensus has now shifted to a steady Fed policy through at least the third quarter.

Another development was the decision by the Bank of Japan on January 18, by a 6-to-3 vote, to keep interest rates unchanged at a time when some market participants were expecting a quarter-point increase. “We are not convinced that these developments will derail major investment themes, such as the quest for yield through carry trades and flows into selective emerging markets,” Chandler says.

Spreads of emerging-market debt and corporate bonds to US treasury securities remain tight, and there has been a sharp advance in global asset markets since last November, making the recent downturn in financial markets seem to be a phase of position-adjusting and profit-taking rather than a change in the underlying bullish theme, according to Chandler.

“Some observers will talk about risk averseness,” Chandler says. “But more often than not, such claims seem like tautologies. When equities, bonds and emerging markets are moving higher, a greater appetite for risk is said to exist, and when the markets fall, investors are thought to be more risk averse,” he says. “As often used, the term seems to be a euphemism for market direction and hence offers little fresh insight into describing, explaining or analyzing market moves,” he adds.

Carry trades do well when the risk appetite of investors is high and market volatility is low, and such trades perform poorly when risk aversion and volatility rise, according to the report by Barclays Capital. “The difficult job, of course, is predicting sudden shifts in risk appetite, as these tend to happen when they are least expected,” it says.

“While extreme panic is not known for its durability, episodes of extreme complacency, in contrast, can last for a very long time,” Barclays Capital says. “Therefore, the fact that carry trades have already gone a long way is not a guarantee that a big correction is just around the corner,” it says.

Meanwhile, there seem to be growing concerns among policymakers in Europe that the euro has strengthened too much against the yen, the report says. “Investors understand that, besides complaining, European policymakers have few options to use to reverse or even stop the recent depreciation of the yen against the euro,” it says. Coordinated interventions by central banks are out of the question, it says, and unilateral interventions are unlikely to succeed.

If Japan were to raise interest rates significantly, the yen would strengthen and there would be less incentive for Japanese investors to seek higher yields overseas. The carry trade, which has been feeding global liquidity, also would be less appealing to global investors. Recent inflation data, however, will tend to limit the ability of the Bank of Japan to raise rates, according to currency strategists at HSBC.

Japan’s consumer price index rose less than expected in December. The core rate, which excludes fresh food but includes energy, fell 0.1% from a month earlier and was up only 0.1% from a year earlier. When one looks at the rate differential between the United States and Japan, this has been the driving factor behind the dollar’s rise against the yen, the HSBC analysts say.

Meanwhile, much softer-than-expected Japanese retail sales data for December further lowered expectations for a Bank of Japan rate increase. Retail sales fell 3.4% in December, following a decline of 0.8% in November. Nevertheless, recent stronger-than-expected US economic data have created optimism in Japan that demand for exports will be sustained and that this could provide support for the Japanese economy.

Even if the Japanese central bank does raise interest rates by one-quarter point in the near term, this is no reason to be overly concerned about a sudden unwinding of carry trades, analysts say. Interest-rate differentials will still remain strongly in favor of the US, leaving the rationale for such trades largely in place. 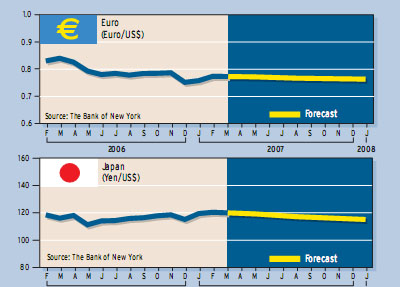 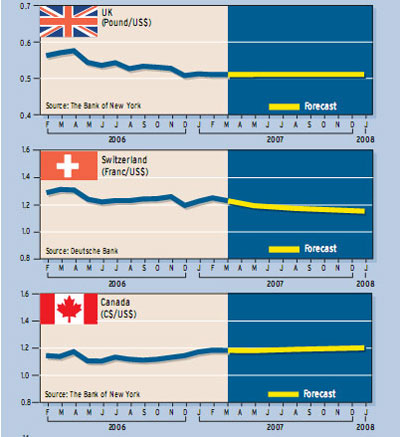 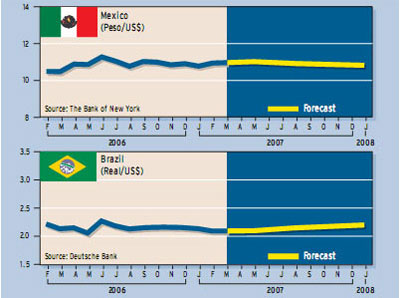 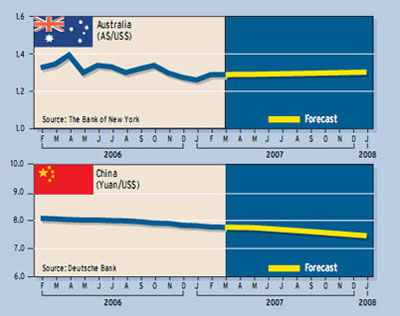 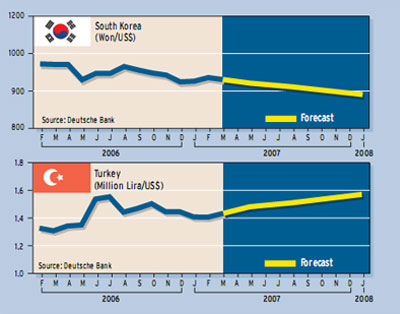