Centerview Partners, an advisory boutique formed last July by three prominent Wall Street investment bankers, was the number-two M&A; adviser in the Americas in January, according to Thomson Financial.

Thus, it shouldn’t have come as much of a surprise that Centerview Partners was selected along with Lehman Brothers to advise Kraft Foods in January on its planned spin-off by Altria to shareholders of Altria, which owns tobacco companies Philip Morris USA and Philip Morris International.

Altria said the separation would enhance Kraft’s ability to make acquisitions, including by using Kraft’s stock as an acquisition currency, to compete more effectively in the food industry. Altria said the spin-off also would allow management of Altria and Kraft to focus more effectively on their respective businesses and improve Kraft’s ability to recruit and retain management and independent directors.

Another benefit of the separation is that it would provide greater aggregate debt capacity to both Altria and Kraft, the companies said.

The distribution of the approximately 89% of Kraft’s outstanding shares owned by Altria will be made on March 30. The divestiture valued Kraft at about $61.7 billion. Altria will not own any shares of Kraft following the spin-off, but it will still own approximately 28.6% of SABMiller, one of the world’s leading brewers.

“We look forward to being partners with our clients and providing advice based on a focus on the long term,” Effron said in a statement last July when the formation of Centerview Partners was announced. “This is the approach to client relationships that each of us has taken through our careers, so we start with a shared philosophy and complementary experience,” he said.

Pruzan, the third founder of Centerview, said, “As an independent adviser, I have found that clients appreciate an external adviser who is thinking about their strategic issues and concerns even when there is no specific transaction in progress.” Earlier in his career, Pruzan assisted Altria’s Miller Brewing division in its $6 billion merger with South African Breweries.

While Centerview’s second-place showing on the M&A; league tables for the Americas in January was the result of a single deal, it had broader meaning. It showed that it is possible to do very big deals outside the shelter of Wall Street’s big investment banks. It also answered the questions of those who wondered how Crawford would fare after leaving the presidency of Morgan Stanley with $32 million in his pocket as a protégé of ousted CEO Philip Purcell. 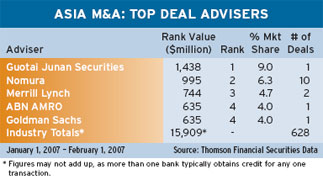 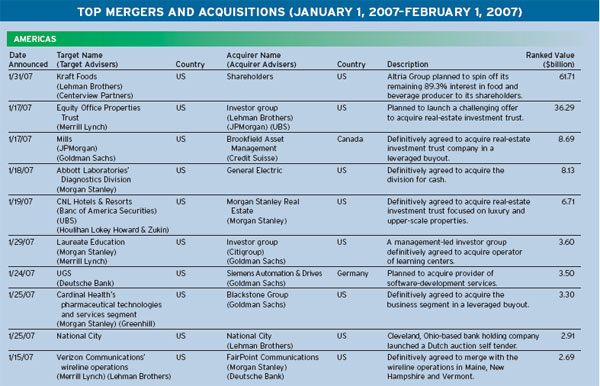