Record foreign demand for US corporate bonds is helping to hold down financing costs for US businesses, as international investors reach for higher yields than are available on bonds in their home countries or on US treasury securities.

Net foreign purchases of US corporate bonds averaged $41.3 billion in the first 11 months of 2006, up from a monthly average of $15.3 billion in the full year 2000, according to the US Treasury Department. Foreign investors bought a record $63.9 billion of US corporate debt in November 2006, the latest month for which data were available as Global Finance went to press.

The foreign private sector, rather than central banks, is the primary source of financing for the US current-account deficit, says Jay Bryson, global economist at Wachovia, based in Charlotte, North Carolina. More than 80% of net foreign purchases of US securities are by the private sector, he says.

Foreign buying of US securities is broad based and is not just concentrated in US treasury securities, according to Bryson. “Corporate bonds remain the primary security of choice among foreign investors,” he notes. “Although we expect the dollar will continue to trend lower against most foreign currencies as interest rate differentials between the United States and the rest of the world narrow further, a wholesale dumping of US securities by foreigners seems very unlikely,” he says.

Inflows Will Prop Up Dollar

At the same time, with foreign investors remaining net buyers of US securities, dollar depreciation should remain very orderly, Bryson says. “Net capital inflows will weaken somewhat this year, but we are not looking for a collapse,” he says.

Meanwhile, yield spreads on corporate bonds above US treasury bonds remain tight, but they could widen a bit if US economic growth slows later this year and creditworthiness weakens for some companies, Bryson says. Wachovia is expecting a soft landing for the US economy, he says, and not much change in spreads.

If there were an exodus of foreign buyers, which Bryson says he does not expect, foreign central banks would be likely to step in as buyers of last resort, he adds.

According to the US Treasury Department, the United Kingdom accounted for 51.6% of the record $63.9 billion of net foreign purchases of US corporate bonds in November 2006, some of which reflected recycling of petrodollars by Middle East buyers acting through London-based investment banks. The second-largest buyer of US corporate bonds was the Cayman Islands, with nearly 10.6% of the total, primarily reflecting hedge funds and other investment funds.

“It is hard to pin down the country where the buying originated by looking at the monthly numbers,” Bryson says. “UK purchases could include buyers located in the Middle East, Switzerland or elsewhere,” he says. Once a year, the US Treasury publishes a benchmark survey of foreign holdings of US securities. The data for June 2006 will be released later this month. 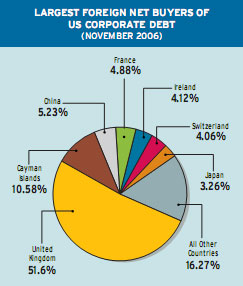 Issuance To Slip From Record

Overall bond issuance in the US is expected to decline by about 4.3% to $4.4 trillion in 2007, according to an annual survey released in January by the Securities Industry and Financial Markets Association, or SIFMA, whose members comprise 650 securities firms, banks and asset managers. The predicted decline will be due in part to the effect of the US housing market correction on mortgage-backed securities and a slip in corporate bond issuance from its record 2006 level, the association says.

“While total issuance in the US is projected to be lower this year, credit market conditions in the current economic environment continue to be quite favorable,” says Michael Decker, interim co-head of research at SIFMA. “These conditions are supported by strong credit-quality metrics, ample market liquidity and investors maintaining a healthy appetite for credit products,” he says.

US corporate bond issuance is expected to decline to $889 billion in 2007 from a record $1.04 trillion in 2006, according to SIFMA. The projected total for this year would still be the second highest on record. The substantial growth in corporate supply for 2006 reflected a surge in mergers and acquisitions and leveraged buyouts, as well as strong business capital investment spending and refinancing. While these trends are expected to remain in place in early 2007, according to SIFMA’s report, supportive market conditions could wane later in the year, as the US economy grows at a more moderate pace and default rates slowly increase from current historically low levels.

US corporate bond volume has remained strong in the early weeks of 2007, according to Dealogic. Volume totaled $71.8 billion from 74 issues in the year-to-date through January 26, 2007, an increase of 32% from $54.4 billion through 69 deals in the same period a year earlier. Financial industry issuers were the most active, with US corporate volume of $52.6 billion in 2007 year-to-date, more than double the $26 billion they issued in the year-to-date period of 2006. Lehman Brothers tops the US corporate volume underwriting ranking so far this year, while JPMorgan leads the revenue ranking, with an 11.8% share, according to Dealogic.

Global investment-grade debt volume in January 2007 reached a record $234 billion from 328 deals, an increase of 16% from January 2006, Dealogic says. Global volume from financial issuers totaled a record $192 billion in January 2007. Investment-grade issuers based in Japan more than tripled their total to $7.8 billion from $2.4 billion in January 2006. JPMorgan topped the global investment-grade bond volume ranking in January 2007, while UBS led the revenue ranking.
Investors outside the US owned more than 29% of the $8.9 trillion of US corporate debt outstanding as of September 2006, according to the Federal Reserve. While that level has increased in recent years, it remained below the 50% proportion of US Treasury securities held by foreign investors. 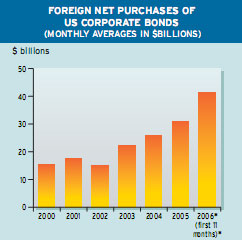 The high level of foreign buying of US corporate debt that is being booked through London suggests that Middle East oil-
exporting countries are increasing their purchases of US securities. Researchers Matthew Higgins, Thomas Klitgaard and Robert Lerman of the Federal Reserve Bank of New York say that although it is difficult to determine where oil exporters’ windfall gains are first invested, the evidence suggests that the bulk are ending up, directly or indirectly, in the US.

Oil exporters have seen their oil revenues rise to $970 billion in 2006 from $300 billion in 2002. While higher oil prices reduce purchasing power in oil-importing countries and thus are a drag on their economic growth, increased purchases of foreign assets by oil exporters are a form of lending that helps importers sustain consumption, the New York Fed report says.

“The recycling of petrodollars into US financial markets has supported activity here by allowing for higher consumption and investment spending than otherwise would have occurred,” according to the Fed researchers. “The concomitant cost has been a further expansion of the US economy’s already sizable net international liabilities,” it says.
Going forward, if oil prices remain high, more of the oil exporters’ windfall is likely to be spent on imports and less on purchases of foreign assets, the report says. While Europe and China have seen a large fraction of their oil payments return to purchase locally produced goods, the US and Japan have seen a much smaller proportion return for this purpose, it says.

The amount of a windfall that oil exporters spend on imports tends to continue to rise even after oil exports later stabilize or back down. All told, just 20 cents of each $1 in increased purchases from oil exporters came back directly to the US in the form of higher purchases of US goods from 2002 to 2006, according to the New York Fed.

Buying Goes in Both Directions
The US Treasury’s monthly breakdown of international capital-flow data for November 2006 showed that overall US net portfolio investment eased to a four-month low of $68.4 billion from $85.3 billion in October. While this exceeded the November US trade deficit of $58.2 billion, the beneficial impact was largely undermined by record US demand for foreign securities, says Michael Woolfolk, senior currency strategist at The Bank of New York. US investors bought a record net $21.2 billion in foreign equities in November and a net $17.8 billion in foreign fixed-income securities.

“Two important observations that emerge from the November data are the acceleration of US investment abroad and the continued weakness of foreign investment in US equities,” Woolfolk says. Foreigners bought a net $1.8 billion in US equities in November, down substantially from $11.4 billion in October.

The weaker-than-expected inflow of foreign capital to the US in November prompted a brief bout of dollar softness. The reaction was limited, Woolfolk says, by the fact that the inflow was enough to cover the trade deficit. 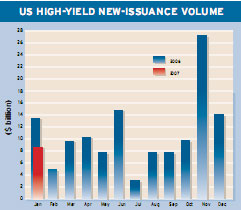