ROARING BACK TO LIFE

Latin America has shown its strength over the past year and is reaping the benefits of that now, with increasing FDI flows, diversified trading partners and debt markets that are heating up. 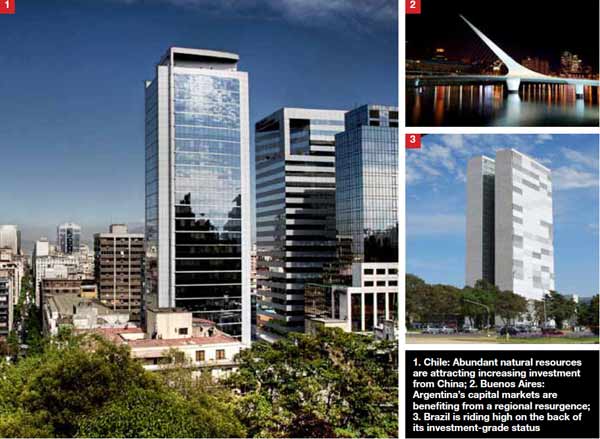 As developed countries floundered last year, Latin America also felt the effects of the global downturn. But unlike developed countries such as the United States, the region's road to recovery has been swift and sure. The financial markets saw new issuance come to a standstill, but little in the way of negative outcomes occurred. As investors searched for growth opportunities, many eyes turned to the region.

As the strength of the markets, and the sound fiscal policies underlying the markets, became clear, foreign firms also began once again directing trade and FDI flows into the region. By last summer it was full steam ahead for most countries in Latin America.

Michael Fitzgerald, chairman of the Latin American practice group of Milbank, Tweed, Hadley & McCloy, says that last year Latin America was the best place to invest in the world, according to the MSCI Emerging Markets Index. "It was ranked even higher than Asia, which is pretty remarkable," he says. "Over the past five years Latin America has been a huge magnet for inflows of capital. Five years ago people would say if you held 5% of your investments in emerging markets, then you were overweighted; now it is more like 25%."

Increasing sovereign strength in Latin America is a big contributor to that change in perception. Brazil, for example, went from non-investment grade to investment grade last year. Brazil and Mexico together make up more than 50% of the GDP of the region. Other countries, such as Costa Rica, are also on the verge of moving up to investment grade, as they mirror the example of long-standing centers of stability such as Chile that have demonstrated the positive impact of sound fiscal and monetary policies on economic strength and growth.

Although already a trend before the recent global upheaval, the importance of Asia as an investment partner has only increased with the financial crisis and the US economic slowdown. Foreign trade and investment flows into Latin America from Asia, and in particular China, have been increasing for a number of years. With the US economy retrenching and US demand drastically down, and with both Asia and Latin America having been less affected and having bounced back more quickly, FDI from China is taking on even more importance.

After falling sharply in the depths of the global crisis, FDI in the region is rebounding quickly. According to analysts at Citi, overall regional FDI in 2007 was $94 billion and in 2008 hit $108 billion. Last year it dropped to about half of that, at $55 billion. But that is expected to pick back up by at least 50% this year to $76 billion, and by next year it should be back up to $95 billion. That is a much faster return than is expected in most other regions. And a good portion of that will come from China. "Gains in trade with Asia have in general been driven by the fact that many countries in the region are strong commodity exporters, and Asian countries in general are intensive users of commodities," explains Alberto Ades, head of Latin America economic and markets analysis at Citi.

Fitzgerald adds, "Any country in Latin America that has abundant natural resources has become a huge trading partner with China." High on the list are Brazil, with its iron ore, soy beans and various other basic materials; Peru, which boasts the second-largest copper company in the world and has a long history of trading with China; Chile, with the largest copper company; and Mexico, which has a range of natural resources and manufactured products of interest to Chinese markets.

External trade balances may not return as swiftly as FDI, however, as demand from major developed partners, such as the US, continues to be down, and domestic stimulus efforts made over the past year have focused on increasing internal demand. "In 2010, with Latin American economies picking up more strongly than industrialized economies and with stimulus policies supporting domestic demand, we continue to expect deterioration in external trade balances," says Ades.

As the US recovers, it will regain much of its importance to the region as a trading and investment partner. Francisco Ferreira, the World Bank's regional deputy chief economist, notes that this cycle has offered increased trade diversification to the region. "Trade diversification, both in terms of composition of exports and of trading partners, is a good thing. It is generally associated with smoother cycles, less volatility and less dependence on the price of specific commodities," he points out.

Markets Roar Back to Life
After coming to a standstill in early 2009, as with most of the world, Latin American capital markets roared back to life last summer. "They went from zero to 60 in a matter of a month," says Fitzgerald. In particular, the high-yield debt markets have seen a huge increase in activity in recent months. Since last summer, with three high-profile deals by Mexican issuers— Petromex, Alestra and homebuilder Javer—the high-yield markets have been buzzing. Numerous other deals have emerged in their wake, including some from Brazil and even some with exposure to the Argentine and Venezuelan markets.

Structures have ranged from straightforward debt deals to more complex transactions that some investors and market watchers thought they might never hear of again. And the pipeline is fuller now for high-yield deals than has ever been the case in Latin America, according to Fitzgerald. "There have been more high-yield deals done in the past four-month period than ever before," he says.

With bank lending highly curtailed, companies have turned to both the straight debt markets and the structured finance markets, the latter particularly in Brazil. In December last year, for example, Crédito Corporativo Brasil registered a Fundo de Investimento em Direitos Creditórios (FIDC), or receivable investment fund, in Brazil valued at R2.88 billion ($1.65 billion). It takes the form of a collateralized debt obligation (CDO) backed by a pool of Brazilian large corporate loans.

"We have all been somewhat pleasantly surprised at the speed with which markets in Latin America have recovered in the last two quarters," Ferreira says. "There has been a substantial increase in investor appetite for risk, which has led to substantial flows back into Latin American markets."

Generally, this has been a good thing for the region, but the speed of recovery of foreign flows worries some. "Policymakers here became concerned with allowing increases in liquidity and foreign inflows to continue completely unchecked," says Ferreira. It gave rise to fears of the region being the next bubble that could burst. As a result, some countries where inflows rose very rapidly began to look at ways to manage that. "For example, Brazil dealt with it by applying taxes to foreign investment, and the view is now that they were relatively successful at slowing the inflows," Ferreira adds.

There is a fine balance that must be struck between managing fiscal and monetary policy in a way that allows continued inflow growth—or expansionary policies—and the need to retrench. "It is not unlike the dilemmas facing richer countries," Ferreira notes, "but it is more pronounced because Latin America is so ahead of the curve in terms of recovery." Even Mexico, which saw a much deeper recession than most Latin American countries in part because of its closer ties to the US, is now coming out of it quite strongly.

Predictability Drives Recovery
Part of what has driven the quick economic and market rebound is policy stability in most countries. Gabriel Torres, vice president with the sovereign group at Moody's Investors Service, says: "What we are seeing in Latin America is that basic policy is becoming more predictable. It used to be that Chile was the best example of this predictability, but now it applies to many other countries. At this point it changes what people are looking for and what they expect. They expect that predictability in policy. Argentina is the odd man out in its neighborhood."

In a year of many elections, as 2010 is set to be, that expected stability is a good thing. The coming year will see the inauguration of Chile's president, Sebastián Piñera, who was elected late last year; the Brazilian general and presidential elections in October; and elections also in Colombia, Costa Rica (see Newsmaker, page 4) and Peru. These come on the back of a host of elections in 2009 as well, including in Honduras, Uruguay, Argentina and Chile. Latin America continues to be a region of political duality, although now it is not so much left versus right but, rather, countries with stronger institutions versus those that still depend on the will of one person. The latter countries are now very much the minority.

"Latin Americans will not go back to closing themselves behind big walls," says Marcelo Giugale, the World Bank's regional director for poverty reduction and economic management. "They want modernity. They don't want to go back to how things were 50 years ago, and that is a feeling that is translating into very specific policy implications."

The economy and the markets must also be disciplined to manage this, Giugale notes. "Latin Americans have now embraced the idea of stability—of prices, of jobs and of the value of their assets," he says. "A politician therefore must propose and implement policies that imply stability in order to get and maintain popularity."