Companies from emerging markets established 57 new depositary receipt programs in 2009, more than half of the year's total worldwide, according to an analysis by BNY Mellon. China-based issuers led the rankings by country, creating 14 new sponsored DR programs during last year. Taiwan was second with 13, followed by India with 12.

"We continue to see great promise from emerging market equities in 2010, as evidenced by the dramatic shift in the flow of funds from developed to emerging markets, especially the BRIC [Brazil, Russia, India and China] countries," says Michael Cole-Fontayn, CEO of BNY Mellon's Depositary Receipts Division.

During the past decade DRs have grown strongly as an asset class, Cole-Fontayn says. "The value of DRs outstanding has tripled, trading volume has quadrupled, and the average US equity portfolio, which began the decade holding 10% in non-US equities, now holds more than 26%," he notes.

The BNY Mellon ADR Index rose 36% in 2009. All but one of the bank's ADR country indexes posted higher returns in 2009, with the Argentina, Brazil and India indexes up more than 100%.

DR issuers from emerging markets accounted for 69% of DR capital-raising issues last year, as well as 55% of DR trading (by value as well as volume) and 52% of new sponsored DR programs.

Brazil maintained its position as the country with the most actively traded DRs, led by Petrobras and metals and mining company Vale. The trading value of all DRs from Brazil totaled $614 billion in 2009, followed by China with $420 billion.

China Hydroelectric, a consolidator of small hydropower projects in China, selected BNY Mellon in January 2010 as the depositary bank for its American depositary receipt (ADR) program, which is listed on the New York Stock Exchange. "China is increasingly becoming a highly competitive energy market and is developing rapidly in the alternative and renewable resource space," Cole-Fontayn says.

Coal-fired power plants account for the bulk of China's power generation, but hydropower has a growing presence. Competition in the electric power industry has been introduced only recently. China Hydroelectric's revenues to date have derived from the sale of electricity generated from its small hydroelectric power plants to local power grids.

The Asia-Pacific region raised four times as much IPO capital through DRs in 2009 than it did in 2008, according to J.P. Morgan. Some 26 new issuers from the region raised more than $4 billion.

"The depositary receipt has proven its resilience as a cross-border capital-raising instrument in a volatile market," says Kenneth Tse, Asia Pacific head of J.P. Morgan's depositary receipts business. He says issuers from emerging markets will increasingly use DRs to raise capital, led by companies in China and India.

Meanwhile, capital markets executives at leading investment banks expect foreign-based companies to play a bigger role in initial public offerings on US exchanges this year, according to a study by accounting and consulting firm BDO. "Asia, the world's fastest-growing region, is specifically seen as the greatest source for this IPO activity," says Lee Graul, a partner in BDO's capital markets practice. The survey of 100 bankers was conducted in December 2009.

When asked what foreign region is likely to spawn the most US-listed IPOs this year, 73% of the bankers surveyed cited Asia. Central and South America finished a distant second with 11%, followed by Europe with 9%.

"Clearly, the capital markets community expects foreign-based businesses to play a larger role in terms of offerings on US exchanges in 2010," Graul says. Some 52% of the bankers predicted that such IPOs would increase this year, while 28% said they would remain the same and 20% anticipated a decrease. 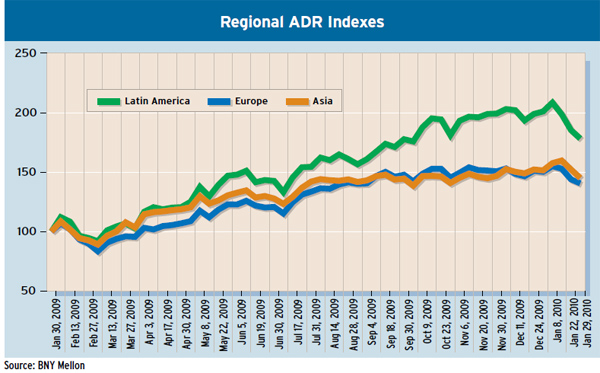