Weakness in the euro is contributing to the dollar's recovery, as the search for a safe haven favors the United States, analysts say. The euro fell to a 10-month low last month, with worries about Greece's sovereign risk spilling over into Portugal and Spain.


"If subprime [mortgages] nearly took down the financial system, what does one think a run on sovereign credit can do?" asks David Gilmore, partner and economist at Foreign Exchange Analytics, based in Essex, Connecticut. "In a still highly leveraged and undercapitalized banking system, these events run the risk of initiating a feedback loop that is akin to the subprime problem," he says.


Perhaps Europe's banking system is not as exposed to weak sovereign credits as it was to subprime lending, Gilmore says. "But how much new pressure on asset quality and balance sheets can the system take if the current problem spins out of control and causes a broad run on sovereign risk?" he asks.


"My guess is that the banks and investment community have a large chunk of that wall of central bank liquidity injected into this market segment, either directly or indirectly," Gilmore says. "We all know the unsustainable nature, too, of the US federal and state deficits," he adds. "But as long as the dollar is the reserve currency, the flight from risk to risk-free assets will ironically help the fiscally challenged US debt market and currency."


The dollar's recent strength appears to be more a function of bad news overseas than of good news in the US, says Marc Chandler, global head of currency strategy at Brown Brothers Harriman, based in New York. He cites efforts by China and India to tighten lending conditions, rising inflation pressures in Brazil and the deficit issues in Europe.


The debt problems of Greece exposed a flaw at the heart of European economic and monetary union, according to Chandler. "Can monetary union be stable in the absence of clear controls on fiscal policy?" he asks. "Such controls may require a surrender of sovereignty that is tantamount to political union," he says.


The danger is that a vicious cycle could develop, whereby high interest rates weaken the prospects for growth, which in turn increases the budget deficit and drives up interest rates further, Chandler says.


While concern is justified about the debt problems of Europe, including Central and Eastern Europe (CEE), these issues will not lead to the collapse of any EU economy, according to George Tchetvertakov, head of market research at Alpari (UK), a provider of online foreign exchange trading services. "These difficulties are already priced into the FX market, but an eventual stabilization will soon come into play as the appropriate authorities intervene to support those nations most in trouble," he says. It is difficult to imagine European authorities allowing an EU member to go bankrupt, he adds.


"The dollar's recent gains, which were based on its safe-haven appeal, could give way to a recovery in the euro over the next few months, due to Europe's yield premium and the potential for more central bank selling of the greenback," Tchetvertakov says. The European Central Bank's monetary policy is more conservative than the Federal Reserve's, which provides support for the euro against the dollar, he says.


"The Russian economy is particularly dependent on strong commodity and oil prices," says Andrey Vedikhin, CEO of Alpari (UK) and co-founder of Alpari Group, which was established in Russia in 1998. "Russia's economy is shrinking, and a stabilization fund won't provide much support before 2011," he says. "While the ruble has been strengthening since hitting lows in March 2009, it is overpriced," he adds.


"The game is not over, and there will be more problems ahead for the world economy," Vedikhin says. "These dangers could become more intense if inflation returns alongside a weak economic recovery."


The ruble's rally was largely due to foreign investment, which can leave the country as quickly as it arrived, according to Tchetvertakov. "If the global recovery falters, it will be very dangerous for investors to be holding rubles," he points out.


The ECB can no longer afford to signal liquidity withdrawal in the face of the world's attention to Greece's deficit-reduction plan and Spain's deteriorating finances, says Ashraf Laidi, chief market strategist at CMC Markets, based in London. "In contrast, more FOMC members will likely join Thomas Hoenig, president of the Federal Reserve Bank of Kansas City, in dissenting against the Fed's stance of exceptionally low levels of the federal funds rate for an extended period," Laidi says.


The US economy surprised everyone with a 5.7% annualized rate of growth in gross domestic product in the fourth quarter of 2009, says Peter Hall, chief economist at Export Development Canada. In past US experience, rapid quarterly gains in GDP often occur just after a period of recession and have been known to last for three to five consecutive quarters, he says.


Inventory stabilization played a huge role in the growth surge at the end of last year, accounting for 60% of quarterly growth, Hall says. "Consumer spending, a key engine of global demand, produced a lukewarm 2% gain, a sign that Americans are still moving forward with caution," he says. "In contrast, red-hot export growth added more to bottom-line GDP than all of consumer spending, although exports are just one-sixth the size of the US consumer sector."


The weak dollar may have played a part in the 28% rise in US exports in the fourth quarter of last year, Hall says. "World exports are on average 13% below peak levels, and with last quarter's growth, the US economy is slightly above average—an anomaly among developed economies and more in line with emerging market status," he says.


The fourth-quarter US growth was a pleasant surprise but should not be mistaken for a true recovery, which will require a more balanced revival in demand, Hall says. 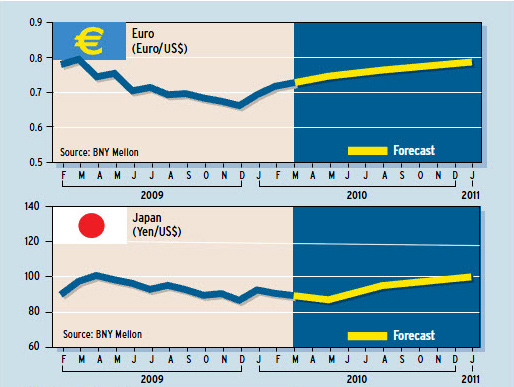 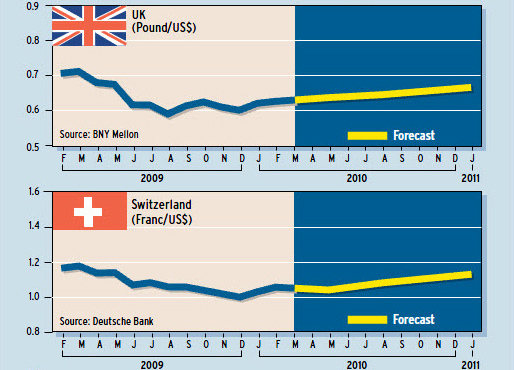 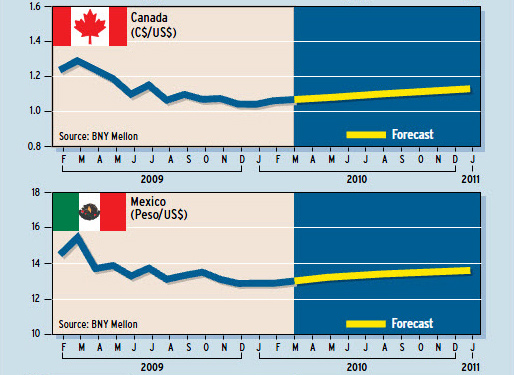