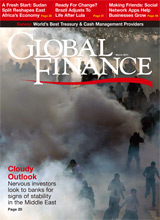 Global Finance has a new editor. He is Andrea Fiano and he succeeds Dan Keeler, who will move on to other projects but continue a close association with Global Finance .

A new editor will mean change for Global Finance’s media products. In order to remain relevant and valuable to its audience, a successful media enterprise must adjust and adapt as the world it covers, be it in North Africa, the Middle East or elsewhere, changes.

Dan Keeler’s seven-year editorship made him the magazine’s second-longest-serving editor after founding editor Carl G. Burgen. Burgen was a pioneer in the coverage of cross-border finance and emerging markets. Dan has carried on that tradition with on-the-spot coverage. In the November issue report on the remarkable transformation under way in Kenya, for example, he demonstrated his clear appreciation of both the economic and human aspects of emerging markets. Dan has also been one of the pioneering voices on the subjects of corporate responsibility and sustainability, and he has helped Global Finance establish itself as one of the leading sources of insight into this crucial facet of modern business.

Andrea Fiano has been involved with Global Finance since the magazine launched in 1987. He has an eclectic journalistic background that includes stints as a restaurant reviewer and a film critic. But it’s the breadth and depth of Andrea’s experience across a wide range of innovative financial media that make him ideally suited for the editorship. He was a leading reporter on the hostile takeovers of the 1980s and the Drexel bankruptcy, and he covered cross-border M&A; in the film industry, the international consequences of the Lehman Brothers failure, as well as a host of stock exchange mergers. Most recently, he was the US correspondent for the Italian financial daily paper MF/Milano Finanza and the Italian TV channel Class CNBC. He has written on international finance for Barron’s and has appeared in the McNeil/Lehrer Report on PBS. A multilingual, multicultural Italian national, he will be based in New York, where he has lived for 25 years.

Andrea has already brought all of us at Global Finance a revived excitement about our mission to cover cross-border finance in a stimulating, informative and novel way for our readers around the world.