A hot start to the year is suggesting that equity markets worldwide may be setting the stage for a return to a 2007- like frenzy during which they entertain all manner of financing and strategic restructurings.

Stock markets worldwide, including emerging markets, developed Asia, Europe and the US, are all expected to go up by about 15% this year, which means IPOs, spin-offs, buybacks and stock-based mergers and acquisitions all have a good chance of coming off well.

This prediction was reinforced by the successful end-of-January $1.89 billion IPO of Nielsen Holdings NV on the New York Stock Exchange. Indeed, its oversubscription confirmed what analysts and IPO strategists have been suggesting—that 2011 will be a strong year for equity markets worldwide in general and that IPOs will play a big part.

The private-equity-backed Nielson IPO sold 70 million shares, and the price soared above its $23 opening level.This has given institutional investors the confidence to invest in solid new offerings and in the underlying markets instead of being knocked about in the speculative traps of the past few years, says Jack Fitzgibbon Jr., founder of research firm IPOscoop.com and a 30-year veteran of IPO syndication desks. Wall Street is comforted by the deal and by the perception that more are sure to follow. It doesn’t hurt that total return of all US IPOs in 2010 was a heady 26.9%.

That may allow the US to return to its traditional position as the world’s leading IPO issuer—the biggest story in 2010 having been that China knocked the US out of this historic position, according to Renaissance Capital, a global IPO research and investment services firm. Owing in part to the surge in Chinese activity, the global IPO market nearly matched the previous peak of 2007, Renaissance says. And a record number of those Chinese IPOs listed in the US. But not all the Chinese IPOs were hits—six of the worst 10 first-day IPO performances of 2010 were for Chinese companies. For 2011, Renaissance agrees, Chinese IPO activity will moderate and US activity will pick up.

Several other large privateequity- funded companies, including Toys“R”Us and hospital operator HCA, are waiting in the wings, and further down the line companies with international presence, like Skype and LinkedIn, are expected to launch IPOs. “The Nielsen deal has opened the door,” Fitzgibbon says. “The professional money is willing to come in. And that’s the key to the market.”

With billions of dollars in institutional money waiting to be put to use, that could mean a big year for the US exchanges. These listings will run the gamut from small to large. Investment banks are happy because they continue to garner 6.5% to 7% fees for new issues, Fitzgibbon says. Companies want to go with the best underwriters to make sure their issues get sold, and in the meantime, the universe of investment banks underwriting new issues has shrunk. Now, only 10 to 15 firms make up 80% of all traffic—compared with as many as 80 or 90 names in the past. Indeed, some smaller firms charge as much as 10% to underwrite a deal, he says.

The US equity markets are not the only hot spot. The overall trend in global markets continues to be good, says Alec Young, international equity strategist for Standard & Poor’s. But S&P; is predicting that this year the performance gap will narrow between the US, Europe and the developing markets. “We should see the economy recovering, corporate profits cycles moving higher,” Young says. “Growth will be slowing in the US, but it will still be up in the low double digits. Also valuations are quite reasonable, especially in light of the profit outlook.”

In addition to the US indexes, Germany’s DAX Stock Index, says Young, should perform particularly well. 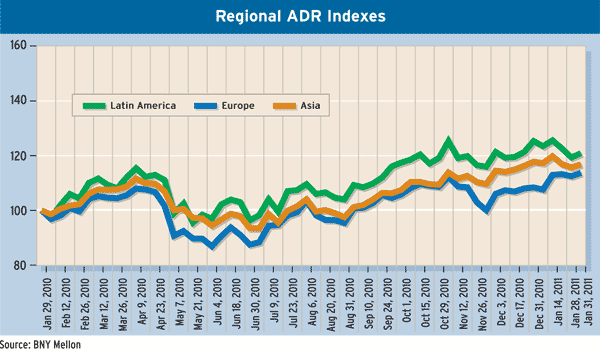