The UK government’s savage spending cuts and deep austerity measures have been touted as a model recovery strategy for stumbling Western economies. Faltering growth is raising questions over the strategy’s validity. 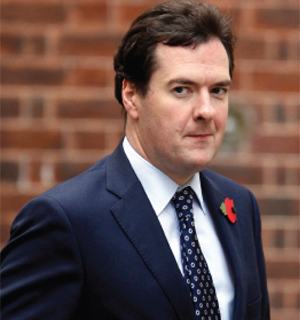 Countries almost everywhere are struggling to get deficits under control, but few are having as tough a time as the UK. The controversial austerity package launched last year by the coalition government—comprising major spending cuts and some tax hikes—was bound to have a powerful impact on a country that had overindulged for years on cheap credit. The medicine is bitter, aimed at dramatically shrinking government as well as persuading bond markets that the UK is serious in tackling its deficit and foreign debt. Unprecedented 25% cuts in central government department budgets and deep cuts to local services including schools, road maintenance and even speed cameras, coupled with a rise in VAT—the UK’s sales tax—from 17.5% to 20% are affecting society at almost every level.

Until recently, things were going well. Markets have been impressed by the resoluteness displayed by chancellor of the exchequer George Osborne (pictured above.) A majority of Britons seem resigned to the need for austerity and a smaller state. But the shock announcement that the economy had contracted by 0.5% in the fourth quarter of 2010—instead of growing by 0.5%, as most analysts had expected—has cast new doubt over the strategy. Even without the impact of the worst winter weather for decades, the economy would probably have registered no growth at all, and this is before the main cuts and the rise in VAT take effect. There has been bad news on the inflation front too, with rising commodity, food and fuel prices all suggesting the UK will face an annual inflation rate of 5%. Meanwhile, doubts remain about the continued effectiveness of near-zero interest rates, with banks remaining ultra-cautious about lending to businesses and would-be homeowners.

Although the government has been advised by the Institute for Fiscal Studies to have a Plan B in case 2011 growth drops below the officially anticipated 2.7%—which would imperil its deficit reduction strategy—in the current climate most observers agree Britain doesn’t have much of an alternative. Bob McKie, market strategist for Independent Strategy, a London-based consultancy, says a more gradual pace of spending cuts would not only upset markets but undermine Britain’s future growth prospects. “If they go slower in reducing the deficit from its current 8% to the planned 3% in 2015, the result will be slower growth in the future—at best around 2% per annum instead of 2.5% or more,” he argues.

On the bright side, January’s figures for manufacturing and services are encouraging: Growth for the first quarter of 2011 could be around 0.5%, and full year around 2%, which is below government forecasts but in line with IMF estimates. “The UK is recovering but at a lackluster pace, much slower than countries like the US which have kept the fiscal gates open,” McKie says.

At least the UK can be thankful it isn’t Ireland. The former Celtic Tiger famously lost its roar with the collapse of its property markets and the near-collapse of its banking system. January saw the outgoing Fianna Fáil government pass a tough austerity package after signing agreements with the EU and several international monetary bodies, only to see Standard & Poor’s cut its sovereign debt rating from A to A-. The agency said the decline in credit-worthiness of the Irish banking system over the past three years had been “one of the most severe we have observed in a major developed economy for many years.”

Many questions remain, not least whether the Irish can pay back the €85 billion bailout agreed to last November and whether the new government will stick to what has been agreed upon with international creditors.