The early months of 2011 have seen a flurry of new M&A; transactions announced across a range of sectors and industries, but it is the announced transactions for stock exchanges that have garnered the most attention. 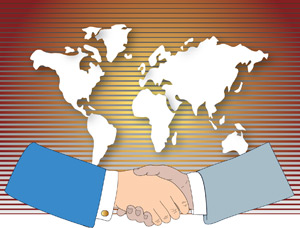 Two major bids were launched for exchanges, and a third deal—launched earlier but held up by political hurdles—saw some forward momentum. First, there was the announcement on February 9 by the London Stock Exchange and Canada’s TMX of an all-share transaction, billed as a merger of equals, which would create the largest mining exchange platform worldwide, with a combined market value of $6.9 billion. Advisers to the LSE included Barclays Capital, Morgan Stanley and RBC Capital Markets on the transaction, and advisers to the TMX were Bank of America Merrill Lynch and BMO Capital Markets.

Less than a day after LSE and TMX unveiled their plans, Deutsche Börse and NYSE Euronext came out with a planned $9.53 billion all-stock deal, with each shareholder in NYSE Euronext getting 0.47 shares of the new company per existing share and Deutsche Börse shareholders receiving one share of new stock per existing share. This would create one of the world’s largest derivatives exchanges—rivaling Chicago’s CME.

Since then, much market speculation has centered on whether the CME would make a counter-offer for NYSE Euronext.

The following week SGX of Singapore and the ASX of Australia announced that they would alter their proposed $7.8 billion cash-and-share merger agreement to make it more palatable to Australian officials in order to win regulatory clearance. The deal was originally announced in October, but has hit regulatory hurdles in Australia. Among other things, the revised deal structure allows for more Australian representation on the combined company’s board.

Merger activity among exchanges is being driven by a combination of factors, including toughening competition from upstart equities trading platforms and a desire to carve out a piece of the growing OTC derivatives trading and clearing markets. Despite the flurry of M&A; activity for stock exchanges this month, though, it is energy and other sectors that are likely to lead the M&A; league tables over the course of this year. Michael Gilligan, a partner in the corporate group at law firm Allen & Overy, notes: “The exchange deals are interesting deals and obviously high profile, but there are only so many deals that can happen in that segment.” 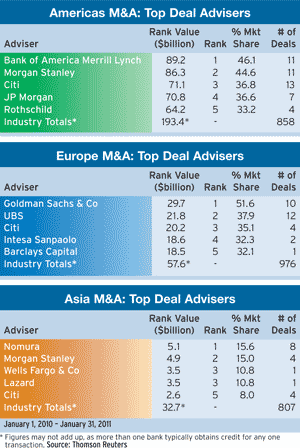 Steve Krouskos, global and Americas leader for Ernst & Young’s transaction advisory services, adds that M&A; is off to a soft start in the first quarter: “I expect technology, energy and healthcare to continue to be strong this year with financial services activity gaining steam in the latter half of the year.”

In January, for example, US group Duke Energy launched a $25.71 billion bid—including $12.2 billion in assumed debt—for 63% of Progress Energy of the US, valuing Progress energy at $46.478 per share, according to Thomson Reuters data. In addition, the UK’s BP agreed to a $7.87 billion share swap with Russian state-owned energy company Rosneft. BP will swap 5% of its shares for a 9.5% stake in Rosneft.

Also in the energy sector is the early-February announcement by UK offshore drilling company Ensco of a $7.3 billion bid for US group Pride International—a deal that would create the world’s second largest offshore drilling group. The deal values Pride International stock at $41.60 a share and gives shareholders 0.4778 Ensco shares and $15.60 in cash for each existing Pride share.

The Ensco-Pride deal has hit a speedbump, however, as a shareholder suit—launched by individual shareholder Cary M. Abrams of New York a few days after the companies’ announcement—alleges that Pride International violated its fiduciary duty to shareholders with the agreement and describes the deal as “unfair and grossly inadequate.”

The unfair and grossly inadequate theme was also highlighted in a brace of failed bids in the UK—albeit from the opposite point of view, as board members used the defense as a way to cold-shoulder hostile bidders. Simon Property Group of the US and François-Charles Oberthur Fiduciaire of France made hostile bids for UK real estate outfit Capital Shopping Centres Group and UK banknote-maker De La Rue, respectively. Both bids failed, as the boards and management of the target companies successfully fought off the advances of the bidders. In both cases management refused to formally enter into bid discussions, saying the offers were too inadequate to warrant serious consideration.

The UK’s Takeover Code requires that companies disclose bids only when “following an approach to the offeree company, the offeree company is the subject of rumor and speculation or there is an untoward movement in its share price.” But whether the share price movement or the rumor is untoward is generally determined by the board of the company itself, and it takes a big push by disgruntled shareholders to even warrant a review by the Takeover Panel over whether a bid should have been disclosed.

In a similar vein, in the US all eyes were on the Delaware Chancery court, which just ruled in favor of takeover target Airgas after rival Air Products launched a hostile $5.9 billion bid. Airgas directors successfully blocked shareholders from ever considering the bid—which is known as a “just say no,” or “just say never,” poison pill defense, after former US first lady Nancy Reagan’s famous antidrug campaign from the 1980s. Air Products was attempting to have a poison pill clause in Airgas’s bylaws that effectively stops any purchase of more than 15% of shares without consent of the board thrown out by the Chancery Court judge. It argued that the poison pill was intended to give the target’s board enough time to evaluate the bid and turn it over to shareholders for decision—a protocol Airgas did not follow.

The Chancery judge sided with Airgas, which countered that a time limit on poison pills had never been considered under Delaware law and that it was the board’s right to determine whether a bid was worthy of being put before shareholders. The Airgas board argued that the $70-a-share bid seriously undervalued the company, which it valued at around $78 a share. Air Products announced it had dropped its bid for Airgas after the ruling came out.

“Just say never” poison pills have gone into disfavor in recent years in the US as shareholder activism has increased; however with the Chancery Court’s upholding Airgas’s right to use the defense, their popularity may once again surge. Scott Davis, partner at Mayer Brown, notes: “If you can use a pill the way the target is [doing so], it will make it harder to do hostile bids.” With the outcome supporting the use of such poison pills—at least in Delaware—it will likely reduce hostile bid fervor this year.

M&A; will continue picking up steam this year as companies aim for top-line growth, according to independent M&A; adviser Paul Siegenthaler. He says: “After two years of a credit squeeze that hindered the financing of acquisition deals and great uncertainty that paralyzed decision-making, the majority will agree that the economic climate is unlikely to become far worse than current projections expect it to be. This allows businesses to formulate hypotheses and rebase their plans with some greater clarity regarding what the future might hold for them.”

Plus, after the extreme cost-cutting exercises of the past few years, in order to grow—or at least maintain—profitability, it will require top-line development that can only be achieved through greater scale, some form of vertical integration, greater  geographical coverage or increased productsand- services offerings. Notes Siegenthaler: “Mergers and acquisitions are an obvious way of achieving such a quantum leap over a relatively short time span.” 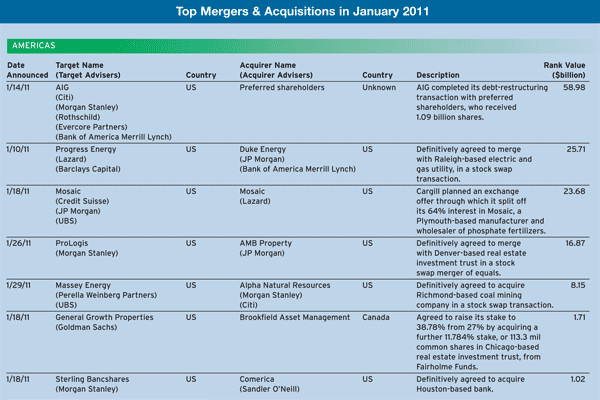