The European sovereign and related bank debt crises should have only a minimal effect on the high-yield market in 2011. 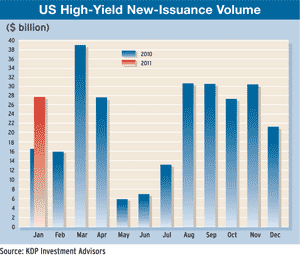 The main reason: About 85% of the market still consists of debt issued in the United States. Although the eurozone has an economy comparable to that of the US, only a small percentage of the current high-yield issues originate there. Canada accounts for much of the remaining issuance, but that base—consisting mainly of energy corporations— is small.

“Over time, we should logically see [the eurozone high-yield debt market] develop, but it hasn’t happened yet,” says Marty Fridson, high-yield investment strategist at BNP Paribas Investment Partners. In fact, the contrast in market size is striking, but growth in the eurozone will likely have to wait until these sovereign issues are dealt with. Meanwhile, Fridson expects that other markets will have little effect on the US market, which should continue to perform well this year as the economy improves.

The percentage of investment-grade debt falling into the junk bond category—so-called fallen angels—has shrunk to 16.6% of the market from 23.5% a year ago. Even better from an investor’s perspective, the high-yield default rate was down to 3% for the trailing 12 months ending in December. This year ratings agency Moody’s expects it to go even lower, to 2%, says Fridson, and other market forecasters have similar expectations.

Other good news is that new issuance has been running at record levels. “Capital has been flowing in,” Fridson points out. Much of the new issuance has been for refinancing, allowing companies to push out their redemption dates to 2012 or beyond. But the market has also been open to capital-raising for expansion. “As long as capital flows in, which we can measure with mutual funds, which have been very strong, there will be strong volume,” he says. Private equity financing should also push new issuance, he adds.

Investors are not expecting price appreciation this year to match the sharp rises that boosted overall high-yield returns in 2010, but issues are still coming to market with yields of 7% and 7.5%, close to double investment-grade rates of 4%. Additionally, high-yield notes are relatively insulated from upward movement of interest rates, which may or may not occur later this year. “Part of the thinking of putting money into high yield is that the economy is doing well enough to take credit risk over Treasuries but not so strong that the stock market is likely to do something so spectacular,” Fridson says.

There are some long-term concerns about the economy, but with little chance of interest rates being raised in the short term, it doesn’t matter near-term if economic growth is stimulated by either monetary or fiscal policy—as long as GDP rises. 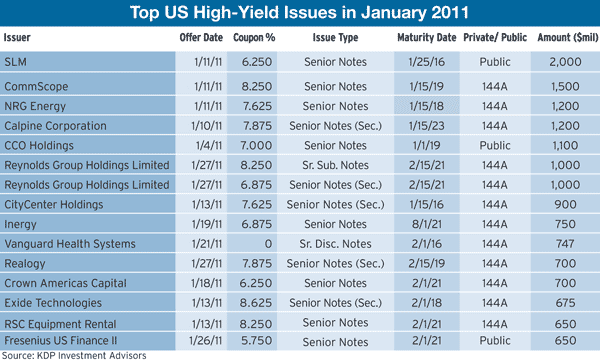