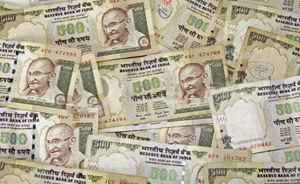 Reliance Communications, India's second-largest cellular operator, controlled by billionaire Anil Ambani, successfully raised US$1.18 billion from the Industrial and Commercial Bank of China, China Development Bank and the Export Import Bank of China. The amount raised will be used to repay foreign currency convertible bonds that have come due and cannot be converted owing to weak stock prices. The new loans carry a coupon of about 5% and term of seven years. As the Indian rupee crashed by 17% during the last four months of 2011, companies that had dollar-denominated debt saw the value of that debt increase significantly, with the potential to impair their balance sheets.

In a surprise judgment, the Indian Supreme Court on February 2 ruled that the 122 second-generation (2G) telecom licenses awarded in 2008 covering 22 service areas were illegal and ordered them revoked. The Supreme Court observed that the licensing process conducted by the department of telecoms and supervised by the telecoms minister at the time was both arbitrary and unconstitutional. The licenses were awarded on a first-come-first-served basis and at low, arbitrary prices rather than following a standard auction process. Several companies that were awarded licenses turned around and sold them for large profits, leading to allegations of corruption against bureaucrats and politicians. The companies affected—such as Telenor of Norway, IDEA and Tata Communications—many of whom purchased licenses from original holders, are preparing to challenge the verdict.

The HSBC Purchasing Managers Index shows a strong rebound in the Indian services and manufacturing sector for the month of January 2012. The services index climbed to a five-month high of 58.0 from 54.2 in December 2011, and the manufacturing index moved to an eight-month high of 57.5. On the back of this rebound, the HSBC India Composite Index moved up to 59.6 in January from 54.7 in December 2011.