Numerous countries around the world are holding elections this year, which could create market uncertainty and hold back much-needed political decision-making—particularly in Europe. 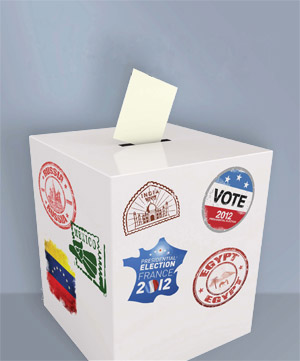 Unlike 2011, which was a year of "unknown unknowns," with largely unpredictable political events—most obviously the Arab Spring—dominating headlines, 2012 will be a year of "known unknowns." Numerous elections and political transitions—in major countries including the US, Russia, China, France and Venezuela—have the potential to create considerable political uncertainty for investors and corporates.

The political risks in each country undergoing change differ: Nobody would equate the potential for upset from the US presidential election with that of Venezuela, for example, however heated the rhetoric between Democrats and Republicans looks set to become. Nevertheless, political transitions have several risks attached to them regardless of whether they occur in the most transparent democracy or the most ruthless authoritarian state.

First, they often produce short-term fiscal risks, especially if budgetary circumstances are tight, says David Gordon, head of research at global political risk research and consulting firm Eurasia Group. "During elections incumbents have a tendency to spend out of control—especially in partial democracies in developing countries: Venezuela will see a lot of spending this year [in anticipation of its October presidential poll]."

Second, political transitions create uncertainty on tax and regulatory regimes and trade policy. "Thirdly, they pose questions about whether there will be coherence following a transition," says Gordon. "For example, will there be a hung parliament, an unstable coalition or a political split between the executive and legislature?" 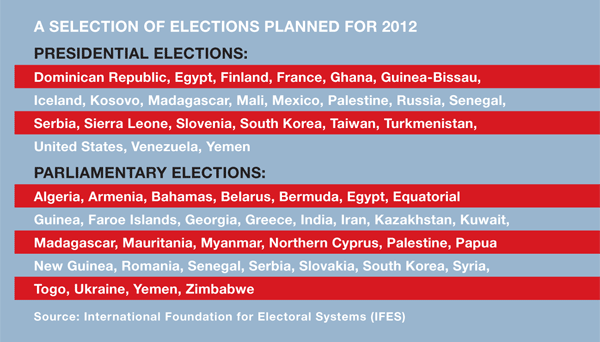 Historically, uncertainties caused by political transitions have been greatest in developing countries.The 1796 presidential election in the US is a good example of this: Then-vice-president John Adams—a Federalist sympathetic with monarchic and aristocratic leanings—faced off against Thomas Jefferson—a Democratic-Republican sympathetic to the French Revolution—after then-president George Washington refused a third term of office. Popular allegiance and enmity toward France and Britain, and aristocratic and democratic impulses in general, swapped back and forth dramatically in the run-up to elections. Adams won the day, with 71 electoral votes to Jefferson's 68.

"Emerging markets are especially prone to instability during elections or transitions because power is often concentrated in the hands of a few people, and therefore there are few natural offsets or mechanisms to smooth a change of power," explains Nick Chamie, head of emerging markets research at RBC Capital Markets.

Now, with many global economies on a knife edge and unprecedented levels of protest—few anticipated the Occupy movement, for example—even elections in the US and Europe carry risk.

Political change invariably reduces risk appetite because of the potential for unforeseen events and, at worst, the chance a situation will unwind in a disorderly way, according to Chamie at RBC Capital Markets. "It pays to place a heavy weight on political events. In 2002 the Brazilian market experienced a rout because of the uncertainty created by the election of Lula." More recently, Middle East markets have yet to recover from the Arab Spring.

Despite many examples of sharp falls in stock prices in advance of or following a political transition, Ewen Cameron Watt, chief investment strategist at BlackRock Investment Institute, says that currencies and bond markets tend to be more affected by political change than equity markets. "It's likely a Sarkozy defeat [in the French presidential election, the first round of which is in April] would result in a wider spread to bunds, for example."

Long-term investors, such as corporates seeking to build a new factory or launch in a country, necessarily think about political transitions and elections in a different way than institutional investors. "There is a tendency for corporate investment to be put on hold during election years because it is generally not that time-sensitive—so it pays to wait out any uncertainties," says Gordon at Eurasia Group.

Michael Denison, research director at consultancy Control Risks, agrees that given uncertain leadership races, companies may be cautious. "They want to know potential leaders' positions on reinterpretation of mining codes and export quotas, for example," he says. But, he adds, "where they believe the order to play is established, they may act to steal a march on their competitors."

BIG RISKS IN THE US?

Leaving aside the controversial election of George W Bush over Al Gore in 2000, which went to the Supreme Court, at first glance it is tough to see the uncertainty created by a US presidential election. Only one of two candidates can possibly win, and their policy positions tend to be well publicized in advance of election day—although campaign promises and post-election actions can be two very different things.

Certainly, the US does not face risks such as asset confiscation, notes Lila Rymer, political risks and credit underwriter at specialist insurer Beazley. "However, there are uncertainties: Whether [the new government] will lean towards more protectionist or socialist policies, the risk of an impasse between president and Congress, the ability of politicians to tackle the deficit and the recent ratings downgrade have a bearing on corporates' and investors' decisions."

Denison agrees: "The US election is important because of the US's status as the world's leading economy. Equally, US foreign policy is important. Investors want to understand what priorities candidates have, whether they will take the US in an isolationist or internationalist direction, which regions and countries they will favor and whether foreign policy will be tied to ethical issues or trade policies, for example."

This year's election is quite important because of its potential impact on economic growth. "Investors need to look at both the policy mix and what is feasible," explains Watt at BlackRock. "For example, there has been a major fiscal stimulus in the US in every election year since 1992. However, the logjam in Congress means that is not likely to be the case this year. As a result, growth rates will be below what might otherwise be anticipated."

As important, domestic politics will mean that there will be no real progress on fiscal reform until 2013—just muddling through on issues such as the debt ceiling, says Watt. Indeed, Eurasia's Gordon says that the greatest uncertainty in the US is not who wins—he says the policy distance between Obama and the Republican candidates is less than the rhetoric would suggest—but whether there will be a post-election move to address the US's fiscal challenges.

Just as in the US, elections in Europe have been relatively risk-free historically. The eurozone debt crises have put paid to that, according to Beazley's Rymer. In the past, her clients sometimes sought counterparty protection in developed countries but only in relation to credit risk. "Now credit risk is intermingled with political and economic risks in the developed world—especially the eurozone," she says.

Elections delay and defer decision-making by politicians, says Denison at Control Risks. This is critical in the French presidential race in April, because president Sarkozy—who is behind in the polls—is keeping an eye to the polls while also being a key player in finding a solution to the eurozone crisis. Denison adds: "The outcome is less risk taking on his part, which may be detrimental to advances in resolving the eurozone situation."

"Will he be able to continue to play that role while he is trying to secure votes for reelection?" asks Rymer. "At the same time, the left in France leans towards a more protectionist and workers' rights agenda, and that may also influence his approach to dealing with the eurozone crisis."

Indeed, the uniquely cumbersome way in which decisions are made in the EU makes every election potentially fraught: The strong showing of the euroskeptic True Finns party last April nearly scuppered one of Greece's bailouts. "The importance of partnerships between countries to making progress in resolving the debt crisis means that a change in leadership in any member state could stall further progress," says Rymer.

Countries that are not or only partially democratic, such as Russia and China, often have greater certainty regarding political continuity versus fully open democracies, but they hold other political risks, according to Beazley's Rymer. "There is potential for unilateral action that is against the interest of foreign investors and in support of domestic companies, for example," she notes.

Neither Russia nor China appear to present such risks, but both do offer potential uncertainty. "There is no doubt over the outcome of the election in Russia [in March], but the policy mix post-election is uncertain: What will Putin's approach to Europe and energy supply be?" asks BlackRock's Watt. Equally, the government's attitude to protests in Russia has diminished investors' expectations that meaningful economic and social reform is possible, according to RBC's Chamie.

China’s corporatist party structure suggests the leadership transition will be smooth. “However, companies and investors should be aware that the balance between different factions within the party could change, resulting in greater emphasis on raising domestic living standards, a new energy strategy or a more aggressive foreign policy, for example,” says Denison.

The transition could create short-term benefits for investors. "The big question for China is the extent to which the government opts to stimulate the economy during the hand-over period—property controls could be lifted, which would be important to domestic growth and the financial sector," says Watt. However, the transition also highlights long-term risks to China's continued economic success. "While the system works, it is resulting in increasingly bland leaders: China needs a new Zhu Rongji if it is to continue its development," says Gordon at Eurasia. 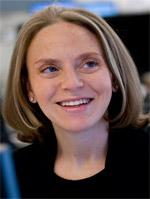 Not surprisingly, analysts canvassed by Global Finance highlighted the Middle East as a potential flashpoint. "The greatest risks in 2012 are where states are entering uncharted territory and effectively creating new systems of government, as in Egypt [which is expected to hold a presidential election before June 30]. Where there is no established precedent, the risk of an unsettled transition is high," says Denison.

Key questions for Middle East elections, such as what type of governments will be elected in newly liberated countries and, if they are Islamic in character, how moderate or extreme they will be and how they will interact with the rest of the world, are critical: Uncertainty in the region has huge potential implications for oil and other world markets.

Most analysts also flag Venezuela as a potential risk. "There is growing discontent about the performance of the economy, and while Chavez has seemingly recovered, there is likely to be concern among voters that he might not live out a full term," says Chamie. Without a clear successor, there could be instability.

Of course, as Gordon notes, there are always potential wild cards. "One in 2012 is India's parliamentary elections. Small parties play a huge role in India—in two large states the main parties, Congress and the BJP, are not even in the running—and that means federal-level institutions are at potential risk."

The future is, as ever, unknowable. As Denison notes: "It's impossible to forecast political risk with complete certainty. But investors and companies can look at potential scenarios and plan accordingly."