SHANGHAI TO EXPAND ITS POSITION AS A FINANCE HUB

China will greatly expand financial activity in Shanghai in coming years, according to a plan released on January 30 by the National Development and Reform Committee. 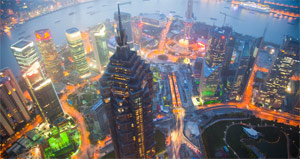 The plan calls for Shanghai to increase the value of non-foreign-exchange-related financial transactions in 2015 to RMB1000 trillion, up from RMB386 trillion in 2010. The NDRC will also invite foreign firms to list on domestic capital markets and promote Shanghai as the global trading center for the renminbi. To accomplish the goals set forth in the plan, the politically difficult steps of reducing barriers to foreign participation and increasing exchange rate flexibility will be necessary, though the plan did not offer a schedule for these steps.

The World Trade Organization ruled against China in January in a dispute with the EU, US and Mexico over export quotas on raw materials. The three countries charged that China's export quotas favored domestic companies and unfairly increased prices on international markets. China claimed that the quotas were necessary to protect its environment. The WTO sided primarily with the three plaintiffs, though the ruling will apply only to the nine minerals cited in the case. The ruling may set the stage, however, for further action against China at the WTO over its controversial export quotas on rare earth metals. China provides more than 90% of the world's supply of rare earth metals.

China will offer more support for its small private businesses, according to a statement posted on the central government's website in February. China's private businesses have struggled in the past year: Chinese banks reduced lending and many small companies sought out high-interest loans from unofficial lending sources. When export markets in the EU and US cooled in late 2011, firms were left unable to make payments on those loans, forcing them to cut employment or close down. The government's plan offers tax breaks and creates a $2.4 billion small business investment fund.