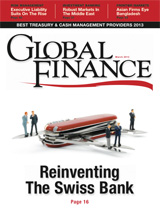 “Optimism reaches the real economy.” This is the headline of a recent report from the Institute of International Finance, which notes that “evidence is mounting that the global economy has reached an inflection point at the turn of the year.” Equity markets seem to bear out this opinion, and there are affirmative signs in several advanced and emerging economies.

The last quarter of 2012 showed the first negative OECD GDP data for Europe overall since the first quarter of 2009—even Germany was not immune—and data were worse than expected. But there is reason to hope that the recession in continental Europe has run its course and that the beleaguered region has turned a corner. Headwinds related to European, and to some extent US, uncertainty are still blowing, but they will result in a “short-term pause” in an otherwise positive trend, according to Benjamin Pace, CIO, private wealth management at Deutsche Bank Americas.

For Switzerland’s banking sector, however, the winds keep getting stiffer. Very few countries have a banking sector as important to their overall economy as Switzerland’s, and even fewer are facing such a challenging revamping of their model and strategy. The Swiss banks’ reinvention — which is the focus of our cover story — resonates not only in Zurich and Bern or in neighboring countries, but globally. For example, countries such as Singapore increased their market share in private banking as a result of the Swiss impasse and regulatory uncertainty.

Western banks in general are still experiencing fallout from the Great Recession. In the past few weeks Canadian bank Toronto-Dominion lost its triple-A rating from Moody’s. This downgrade, which coincided with similar downgrades of four other Canadian banks, has symbolic significance because TD was the last wholly public bank to have an Aaa rating in the world. Ironically, this happened around the same time that rival rating agency S&P was sued by the US Department of Justice for fraud in rating structured financial products in 2008 – 2009. The controversy is still open, and S&P denies any wrongdoing, but once again the rating agencies are being scrutinized and criticized in the US and in Europe. Nonetheless, their ratings are still extremely relevant to global financial markets.