Its strength reflects the progress that European leaders are making in dealing with sovereign debt concerns, but the problem of weak economic growth in Europe means there is a limit to how far the euro can climb, according to analysts, unless economic conditions across the continent improve considerably.


Alistair Cotton, senior analyst at Currencies Direct, a London foreign exchange broker and international payments provider, says: “The European Central Bank has done a good job in reducing tail risk. There is growing optimism in Europe. Spain lifted its ban on short-selling stocks and bonds, and the Cyprus debt problem is manageable.”


However, the euro will not be able to maintain its newfound strength against the dollar for the long term, Cotton says. “If we see improvement in the US economy, investors could begin to move away from bonds and interest rates would go up.” He notes that the higher rates in the US relative to Europe would drive the dollar up against the euro.

RETURN TO NORMAL
The dollar is already moving away from the “risk on, risk off” scenario of the past few years, whereby any bad news and decline in risk appetite would cause the safe-haven dollar to rise, according to Cotton. “Good news is now positive for the dollar, rather than negative,” he says. “The relationship is moving back to normal.”


The dollar and the euro both weakened significantly against the Japanese yen after the Bank of Japan grudgingly raised its 1% inflation target to 2% and promised open-ended easing in 2014. “The BOJ must follow a narrow and precarious path,” Cotton says. “It needs to devalue the yen slowly and steadily. If it moves too quickly, Japan’s bond market would fall and rates would rise, increasing the cost of financing so much debt outstanding.”


Meanwhile, the British pound has weakened amid concerns of a potential triple-dip recession and policy uncertainty in the UK, according to Cotton. “There is a growing level of disquiet and a louder debate about austerity,” he says. “Prime minister David Cameron’s promised referendum in 2017 on whether Britain should stay in the European Union is adding to uncertainty.”


Mervyn King, the outgoing governor of the Bank of England, seems to have left the door open to more quantitative easing if necessary, judging by his recent remarks. Canadian Mark Carney, who will take over from King in July, is seen by the market to be “a safe pair of hands,” according to Cotton. Carney is expected to focus more on stimulating economic growth than on inflation targeting.

WATCHING THE FED
As far as central bank action goes, the Federal Reserve is using an interesting paradigm, according to Cotton, because it has tied quantitative easing to an economic outcome. “The question is how far the Fed’s balance sheet can expand.” The European Central Bank is the only major central bank withdrawing liquidity from the system by accepting repayment on billions of euros of crisis loans, which has added to the euro’s strength.


There has been a key divergence in the dollar’s recent performance, says Marc Chandler, global head of currency strategy at Brown Brothers Harriman. “The dollar has been trading higher against most currencies except the euro and those currencies, like the Swiss franc and the Scandinavian currencies, that move in the euro’s orbit,” he says. “Sterling [UK pound] is the exception in that it is in the euro’s orbit but has broken down.”


Interest rate developments help to explain this divergence, Chandler says. “One of the key developments has been the steep backing up [rise] of short-term European interest rates,” he says. The increase began at the end of last year and has accelerated this year. The US-German two-year spread, which historically tracks the euro-dollar exchange rate, has collapsed, Chandler says.

DE FACTO TIGHTENING
Higher-than-expected repayment of euro crisis funds has served to accelerate forces already at work, essentially tightening monetary conditions, according to Chandler. “The ECB is passively accepting the tighter conditions while the Fed’s balance sheet continues to expand,” he says.


The rise in January in US non-farm payrolls of 157,000 was in line with expectations, but back-month revisions were worth another 127,000 jobs, and average hourly earnings rose 0.2%, which was a bit more than anticipated, Chandler says. As such, the unemployment rate rise—to 7.9%—reflects a higher participation rate in the labor force and incorporation of new census data, he adds.


The revisions mean that the US added a net 196,000 jobs in December and 247,000 in November, Chandler says. “This clearly shows that the fiscal cliff issues did not in fact restrain hiring,” he says. “After the shockingly weak fourth-quarter US GDP [which declined 0.1% year over year], there was some fear that with the end of the payroll-tax holiday, the US may have slipped into recession. However, in light of the employment data, this is unlikely.”

The FX market focus will probably stay on the US economy, with its performance very central to the global growth picture and market sentiment, Ali notes. “Bernanke’s commitment to super-loose monetary policy saw the dollar fall to a 14-month low against the euro on assumptions that the US central bank will continue to expand its balance sheet and increase the supply of dollars long into 2013 and possibly until 2014.”


US manufacturing growth picked up in January to its highest level in nine months, according to the Institute for Supply Management. New orders and employment in the sector improved. The ISM’s index of US factor activity rose to 53.1 in January, which was the highest since April 2012. Analysts said the rise contributed to positive risk appetite. 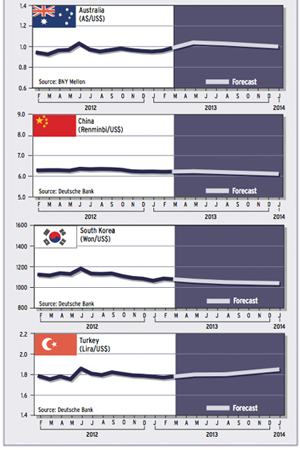