The overall January deal totals for the Americas and Europe surpassed the levels of January 2012, although M&A transactions in Asia were off slightly from a year earlier, according to Thomson Reuters.

Kinder Morgan Energy Partners, the biggest US pipeline company, agreed to acquire Houston-based Copano Energy in a stock-swap deal valued at $4.7 billion, including debt. The acquisition will give Kinder Morgan natural gas gathering capabilities in numerous shale-energy properties in the US. “We continue to be bullish on the domestic shale plays and believe they will drive substantial future growth,” Richard Kinder, chairman and CEO of Kinder Morgan, said in a statement. “We will be able to pursue incremental development in the Eagle Ford Shale play in south Texas, [and] gain entry into the Barnett Shale Combo in north Texas and the Mississippi Lime and Woodford Shales in Oklahoma.”

GATHERING GAS
Copano Energy owns or operates 6,900 miles of natural gas pipelines in Texas, Oklahoma and Wyoming. Kinder Morgan will gain complete control of the Eagle Ford Gathering that collects, transports and processes natural gas for producers in the Eagle Ford Shale. It agreed to pay a 24% premium for Copano, its partner in the gas-gathering joint venture.

IRON-ORE MINES
A consortium led by South Korean steelmaker Posco and Taiwan’s China Steel agreed to acquire a 15% stake in ArcelorMittal Mines Canada for $1.1 billion. Owing to weak steel demand, ArcelorMittal has been selling assets to lower its debt. China Steel has been seeking to increase its self-sufficiency in iron-ore supplies by investing in mines.

In Europe, German utility E.ON and France’s GDF Suez agreed in January to sell their combined 49% holding in Slovak gas group SPP for $3.5 billion to EPH, a Czech investment fund. The Slovak government is also selling its 51% stake in SPP, which operates retail gas-distribution networks in the country and owns a section of a key pipeline that transports Russian gas to Western Europe.

E.ON also agreed in January to sell a 43% stake in E.ON Thüringer Energie, based in Erfurt in central Germany, to a municipal consortium, KEBT. The deal has a rank value of $1.16 billion.

KOREAN BANK DEAL
In Asia the largest M&A transaction in January was Hana Financial Group’s agreement to acquire the remaining 40% stake in Korea Exchange Bank in a stock-swap transaction valued at $1.76 billion. The deal completed Hana Financial’s $3.9 billion takeover of KEB from Lone Star Funds and the Export-Import Bank of Korea.

Hana Financial said the acquisition would expand its global reach, enabling it to compete abroad with KB Financial and Woori Finance Holdings. The deal had been pending for more than a year because of legal and regulatory delays. 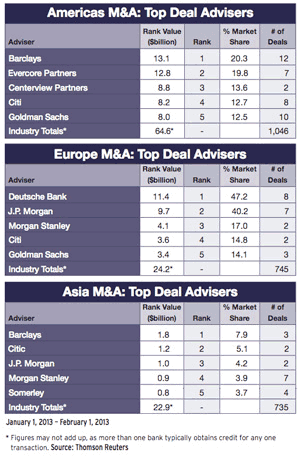