Neither the consequent volatility in emerging markets nor weak US employment data will deter the Federal Reserve from continuing to gradually reduce its purchases of bonds, analysts say.

“Moderate job growth remains in place, which will keep the unemployment rate on a downward path and the Fed on a trajectory of further reductions in its asset purchases,” says Michael Gapen, chief US economist at Barclays Capital. “That said, there appears to have been some slowing in the pace of payroll gains, which would be consistent with our expectation that real GDP growth will slow to about 2.5% in the first quarter of 2014.”

The Federal Open Market Committee has said it would look at a variety of indicators to assess the health of labor markets, Gapen says. “In our view, the type of volatility seen in recent weeks is insufficient to cause the committee to alter its policy stance, particularly so soon after tapering began,” he says.

Barclays continues to expect the Fed to taper its asset purchases by $10 billion at each of its meetings through September, and take a final $15 billion step down in October to conclude QE3, the third round of quantitative easing. 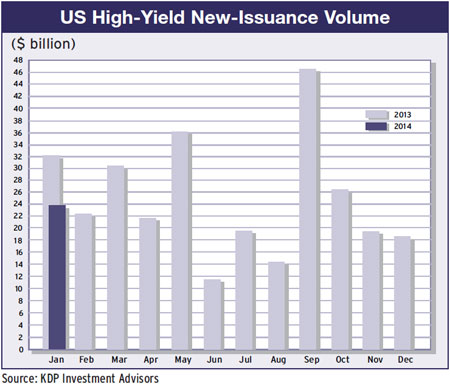 Tom Porcelli, chief US economist at RBC Capital Markets, says: “The widespread belief that the [January] payroll report was disappointing seems completely off base, in our view. Private job growth did not come in materially different relative to consensus expectations, and thanks to wage gains holding up, there is no need to adjust growth expectations. The Fed is likely undeterred by this report.”

Wage gains almost always matter more, as long as job growth is not falling off a cliff, Porcelli says. “The wage number tells you more about purchasing power and economic growth than a level of net jobs added could ever do,” he says. Nominal aggregate wage growth remains steady at a 4% annual rate, according to Porcelli. “The 0.3% advance in the wage pie [in January] is equivalent to adding more than 380,000 new private payrolls,” he says.

Meanwhile, the emerging markets sell-off, whether related to a slowdown in China or Fed tapering, has caused investors to pull some funds from high-yield bond funds. However, issuance of new high-yield debt issues totaled $23.8 billion in January, up from $18.5 billion in December, according to KDP Investment Advisors.

Trade and Development Bank of Mongolia and several Chinese technology companies issued dim sum (offshore renminbi) bonds in January, contributing to record issuance for bonds and certificates of deposit in Hong Kong for the month. CD issuance was strong on the back of record-high refinancing demand, according to HSBC.

“We expect more issues from Chinese companies’ overseas subsidiaries,” the bank says. “Offshore funding costs for Chinese corporates are still 200 basis points cheaper than onshore, and we believe this gap will remain over 150 basis points in the near term.”

Chinese issuers would like to secure offshore financing as early as they can, owing to concerns that yields may rise amid the supply deluge and a likely further sell-off in emerging markets assets, HSBC says. Chinese companies are suffering from a heavier debt burden, with rising financing costs, at the same time as profit margins are declining. 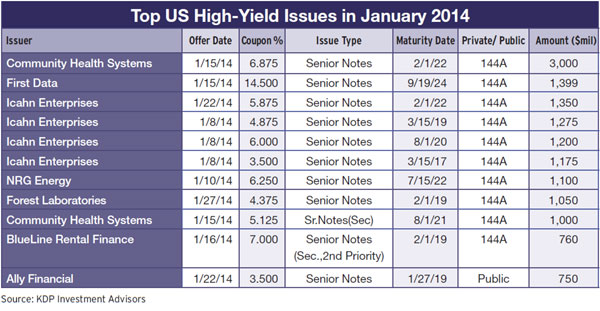