Thirty-four developing countries—including all of the so-called Fragile Five nations—will have elections this year. Their results will be felt not only by other emerging economies but by global markets.

At the end of January, panic gripped emerging markets. Stock prices fell sharply worldwide, and there was talk of a crisis. In the space of two days after the shares fell, three of the world’s largest developing economies—India, Turkey and South Africa—had increased interest rates.

The moves followed six successive benchmark hikes by Brazil and a rise by Indonesia in November that took interest rates to the highest level since 2009. The central banks of these countries were responding to the need to prop up their currencies and stem capital outflows. Their actions were prompted by the tapering of the Federal Reserve’s quantitative easing program—which caused hot-money investors to pull money out of emerging markets—and by a realization that monetary policy in many emerging markets has been too loose, given inflation and other risks.

What was less noted at the time was that the countries most under pressure from investors—Brazil, India, Indonesia, South Africa and Turkey, known as the “Fragile Five” nations—all have major elections in 2014. Many of these countries have experienced social unrest, and fears are growing that elections could spark political turmoil, undermining already frail economies. 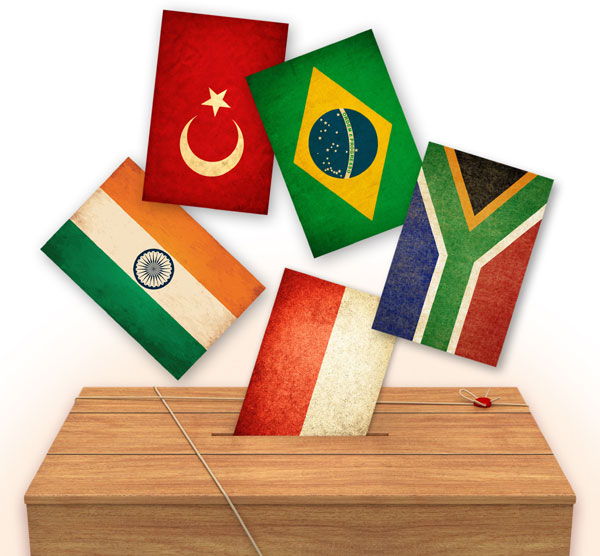 Certainly, elections in these five leading emerging markets—all members of the G20 group of nations—will frame some crucial issues. They will highlight the pressures democratic political systems are under, given growing expectations from a burgeoning middle class and the backdrop of sluggish economic growth. The hope is that these elections will be able to decipher these issues satisfactorily enough to avert calamity.

The spread of democracy throughout emerging markets—which accelerated rapidly in the 1990s, allowing the majority of the world’s population to vote freely by the end of the decade—is, of course, welcome. Democracy offers the potential for greater political, social and economic freedom. However, these freedoms create political risk—both for a country’s citizens and for foreign institutional investors and corporates.

“Elections create the chance of a change in the political establishment and therefore have to be carefully analyzed,” explains Jan Dehn, chief strategist at emerging markets investment manager Ashmore, which manages $75.3 billion in assets. “A judgment must be made about how elections will unfold and their potential implications.” Necessarily, such a judgment prompts caution: Many corporates put foreign direct investment on hold before major polls.

It is tough to gauge the implications of elections. “Often in advance of elections, markets exaggerate the differences between candidates and outcomes and underestimate the scale of post-election reforms (whoever wins),” says Dehn. “Political risk is usually overpriced during elections and underpriced the rest of the time. For example, the market was fearful of Lula [Luiz Inácio Lula da Silva] before his election, but he turned out to be one of Brazil’s best presidents.”

More generally, political risk is notoriously difficult to predict, notes Stephen Kay, US practice leader for political risk at insurance broker Marsh. “It’s often seen through a rear-view mirror, and there is an assumption that stability will continue. Necessarily, that approach is fraught with problems, as Egypt’s recent history shows. Political risk can’t be analyzed actuarially like property risk, for example. By definition, it is black swan territory [where a rare event can have huge ramifications].”

All government systems carry political risk, and there is little correlation between different systems and long-term risk. Nondemocratic or partially democratic countries, such as China and Russia, can be politically stable and therefore ordinarily less risky. “[However,] in nondemocratic countries, the security apparatus may be used to control dissent,” says Kay. When things go wrong, the outcome can be catastrophic: “stability may just be a veneer, as in Libya,” he adds.

Countries with a democratic system have the capacity to adapt to changing conditions. “Elections can act as a pressure release valve by providing a legitimate way to achieve change and implement an alternative vision for a society,” says Jonathan Wood, global issues analyst at consultancy Control Risks. However, elections can also produce unexpected or unsustainable outcomes. “In North Africa, elections have served to sharpen latent divisions,” says Wood. “The process of balloting has de-legitimized the political environment because it produced outcomes that the majority did not want.”

The forthcoming elections in Brazil, India, Indonesia, South Africa and Turkey are just a handful of the 34 elections scheduled in developing markets this year. However, these five elections are instructive examples: They are taking place among the world’s largest emerging-markets democracies, and they are occurring at a pivotal time in the history of developing countries.

“Election dynamics are unique in each country, but there are broad themes that are similar,” says Wood at Control Risks. “There has been a rapid move to middle income status among many large emerging markets, such as Brazil, India and Indonesia.” According to a report released last year by EY and the Skolkovo Institute for Emerging Markets Studies, we are living through the third major expansion of the middle classes since 1800: In Asia alone, 525 million people already count themselves as middle class. With economic growth people are often willing to overlook other issues, such as corruption, and political problems often go unaddressed, says Wood. “At the same time, expectations surrounding jobs and services have increased.”

As a result, these forthcoming elections will be the first time that many emerging markets have faced a perfect storm of sky-high expectations and chastened means.

Emerging markets elections may be dominated by common themes, but each country is responding differently to them. “We’re coming out of a 10-year period when emerging markets were a single asset class that moved in sync,” explains David Gordon, head of research at political risk consultancy Eurasia Group. “Emerging market countries are diverging because of different economic dynamics, policy trajectories and political pressures.”

These differing forces inform how politicians are addressing issues such as the rise of the middle class and a decline in economic growth.

“In Turkey, [prime minister Recep Tayyip] Erdoğan has come out against many of the aspirations of the middle class, such as environmental improvements and the need for greater openness, and has instead doubled down on his traditional and nationalist voter base,” notes Gordon. Erdoğan has also complained about interest rate rises by Turkey’s central bank.

In contrast, Brazil’s president Dilma Rousseff has tried to harness the energy of the middle classes by responding to their concerns, according to Gordon.

Most important, Rousseff has made the fight against inflation a top priority. Speaking at the World Economic Forum in Davos, Switzerland, in January, she said that Brazil “won’t let [its] guard down on inflation” and is “determined” to meet the 4.5% midpoint of the central bank’s target range.

Rousseff’s logic in adopting a strident anti-inflation policy is politics-as-usual for most emerging markets. “Incumbents will do anything to maintain macroeconomic stability in advance of elections,” says Dehn. “The reason is that in emerging markets most people do not receive government benefits and have low incomes, and therefore inflation is destabilizing. Politicians that destabilize the economy are punished at the ballot box.”

In India the prospective prime minister, Bharatiya Janata Party leader Narendra Modi, is trimming his sails in order to mount a convincing run for office. Although he has led a strongly pro-business government as chief minister in Gujarat, where the middle class is growing fast, India remains a vast, diverse—and poor—country. “National government in Delhi is very different to Gujarat, and the middle class does not yet dominate national politics in India as it does in some states,” says Gordon.

Campaigning in January, Modi revealed his response to this dichotomy when he accused the Congress-led UPA government of failing to eradicate poverty for electoral reasons. To ram the point home, he highlighted his humble beginnings as a tea seller.

In South Africa, while the rhetoric of the ruling ANC remains populist, pressure from the middle class may help to change policy. “The trade union movement has for some years put a lot of pressure on the government to sustain labor policies favorable to unions,” says Gordon. “However, the coalition within the ANC that supported that policy is starting to fragment as pressure from the middle classes builds to generate jobs.”

Of the five major emerging-markets elections this year, Indonesia’s is the hardest to assess. President Susilo Bambang Yudhoyono is stepping down, and analysts cannot point to an obvious successor (not least because many likely candidates remained undeclared in early February). While populist and nationalist sentiments are on the rise in the country, it is impossible to evaluate the extent to which the middle class will be courted and how economic problems will be addressed.

WHAT TO WORRY ABOUT

While democracy is far from a guarantee of stability, for Brazil, India, Indonesia, South Africa and Turkey it seems to be channeling discontent efficiently enough to prevent a crisis. As Kay explains, countries where there is a disparity between political freedoms and social gains have an elevated risk of instability: “However, this is especially great in repressed societies.” The relative absence of repression in these five emerging-markets giants is undeniably a positive.

That is not to say that investors and companies can sleep soundly during these elections. The outlook in Turkey is especially troubling, according to Eurasia’s Gordon, because the ruling AKP group’s loyalties are split between Erdoğan and Islamic scholar Fethullah Gülen. “Moreover, the country is heavily affected by the spillover from Syria and tensions with Iran,” he adds. Nevertheless, military intervention is unlikely because the AKP has penetrated the military more effectively than any party has in the past. Few expect Erdoğan to lose the country’s first direct presidential contest later this year.

Elsewhere, political protest is unlikely to spiral into major social unrest. The absence of an effective opposition in South Africa could prompt dissent, according to Wood at Control Risk. However, no one anticipates a threat to the government. Similarly, in Brazil, which experienced violent clashes during the FIFA Confederations Cup football tournament last year, protest is best understood as a way of venting frustration. “Brazil’s strong democratic tradition means that much of that unrest is just the healthy functioning of democracy,” notes Kay at Marsh. Rousseff is widely expected to win reelection in October.

In Brazil, as in many of the other countries holding polls this year, including South Africa, disillusionment is a more likely post-election outcome than political turmoil. “India is likely to disappoint investors who have hopes of a new pro-business approach and greater dynamism,” says Gordon. “The inertia in the system and difficulties in dictating national policy (because of states’ strength) mean it will be difficult for a new government to make fundamental changes.”