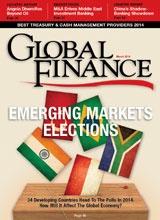 The effects of the tapering by the Federal Reserve in the US and the slowdown in China are often cited as the main reasons for a deceleration or, worse, a real crisis in some emerging markets. Economists are paying special attention to a quintet of countries nicknamed the Fragile Five—Turkey, Brazil, India, South Africa and Indonesia—those economies most dependent on foreign investments to continue their growth, and therefore most at risk now.

Fed tapering was certainly expected, and given that a Fed-tapering false alarm last year had serious consequences on weaker emerging countries and currencies, it is hardly surprising that the real thing has had a big impact. Nonetheless, there is serious criticism coming from countries such as India and the Philippines that the US central bank has not been mindful of the consequences on other economies. India and Turkey have responded to the resulting capital outflows with interest rate hikes, but nobody can be sure that the worst is over.

There is room for a comparison with previous EM crises, such as the one in Southeast Asia 17 years ago. But the comparisons go only so far: As many market watchers are noting, local economies today are much stronger and more balanced than they were in 1997.

Our cover story on emerging markets elections, planned far ahead of recent EM volatility, has particular relevance now. The elections in many developing countries this year are crucial for obvious political reasons, but also because they will determine the future monetary and economic policies of those countries—their moment of truth.

One thing seems clear: No longer is it possible to speak of emerging markets collectively. There are winners and losers in each region of the world; there are more-fragile and more-stable economies. Now we will see how effectively each country has used the recent growth to solidify its economy and institutions.