The Japanese yen and the dollar rode an updraft in recent weeks caused by a flight to safety amid the emerging markets crisis. Meanwhile, the euro also was strengthened by the European Central Bank, which kept rates on hold and dismissed the threat of deflation.

The fact that the Federal Reserve is tapering its asset purchases should support the dollar, analysts say. The stronger yen, however, runs counter to “Abenomics” and could frustrate that country’s “three-arrows policy” to defeat deflation.

Marc Chandler, global head of currency strategy at Brown Brothers Harriman, says: “The investment climate has proven extremely difficult for investors to navigate. Fed tapering and better world growth were [expected] to lead to higher interest rates. Yet interest rates for the developed world have fallen sharply in recent weeks.” US Treasuries were a favorite safe haven in the storm. “Aggressive quantitative easing by the Bank of Japan was widely understood to be yen negative, yet the yen is the only currency to have been stronger than the dollar in January,” Chandler says.

When it comes to the emerging markets, investors were expected to take a more differentiated approach, he says. “Countries with poor macroeconomic management or a large current-account deficit were particularly vulnerable, yet it appears that the entire asset class was tarred with the same brush,” Chandler says.

One clear implication of the crisis is that real interest rates will have to rise through most of the emerging markets, he says. This will have negative knock-on effects for growth. However, because of some structural reforms—including more flexible currency regimes, somewhat deeper capital markets and the accumulation of reserves—many emerging markets countries are better able to cope with capital outflows, according to Chandler.

A trade-weighted basket of the main emerging markets currencies declined almost 3% in January, according to Deutsche Bank. “Markets remain unconvinced how committed emerging markets’ central banks are to reining in inflation,” says Henrik Gullberg, FX strategist at Deutsche Bank Securities in London. “Recent policy tightening in Brazil, Turkey, India and South Africa is one step in that direction, but as the Fed has reaffirmed its intention to stay the course on tapering, further rate hikes are needed.” Moreover, there is little evidence that policymakers are willing to tighten fiscal policy where necessary to facilitate the adjustment, according to Gullberg. Therefore, emerging markets’ currencies will remain the relief valve until policies change more forcefully, he adds. 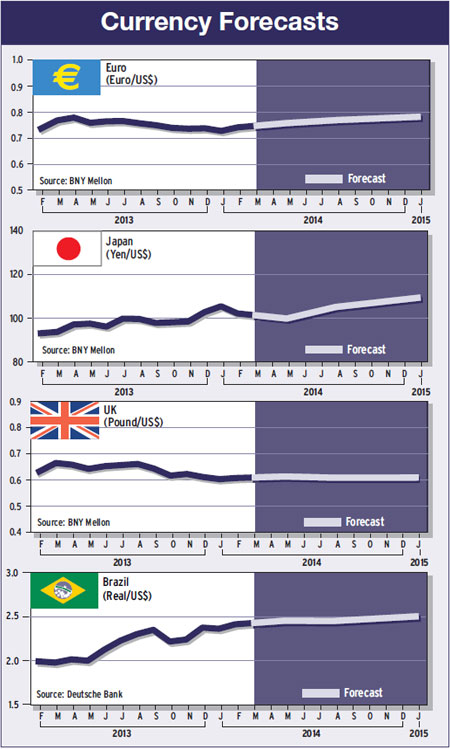 European Central Bank president Mario Draghi said at his monthly press conference in February: “We have to look through the high volatility [in emerging markets] to see if it is a temporary phenomenon or something that will stay for a prolonged period of time.”

Although the ECB has kept its main lending rate unchanged at 0.25%, Draghi said it stands ready to act if necessary.

He also cast doubts on future ease, however, with his remarks about eurozone inflation, which slowed to 0.7% in January. “We have to dispense with this idea of deflation,” Draghi said. “The question is, Is there deflation? The answer is no.”

The dollar has yet to gain sustained strength from Fed tapering, according to economists at Samba Financial Group in Saudi Arabia. “It may take some time to do so, since additional dollars will continue to be pumped out until tapering is complete; by contrast, the stock of euros is contracting as European banks repay loans to the ECB,” the group said in a recent report.