“The emerging economies’ average [on the PwC Escape Index, which measures how countries can “escape” from their current economic position and move into a higher economic gear] has continued to rise since 2007, while the advanced economies’ average has fallen back since the global financial crisis hit....Saudi Arabia, Malaysia, China and Chile lead the way for the emerging markets and score higher than the US in 2012, suggesting they may now be escaping from the “middle-income trap” toward advanced economy status....The US and UK have dropped down the rankings of advanced economies between 2007 and 2012, according to the index. But it’s the eurozone crisis economies—Italy, Spain, Portugal and Greece—that have fallen the farthest since the crisis hit in 2007. Greece has now dropped outside the top 30 countries.” 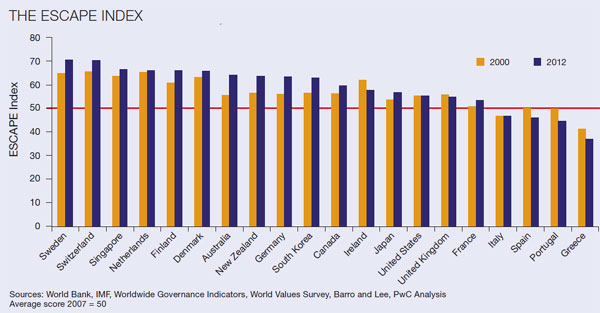 From GFMag.com — Our online readers have their say

How would you rate Benjamin Bernanke’s performance as US Federal Reserve Chairman?