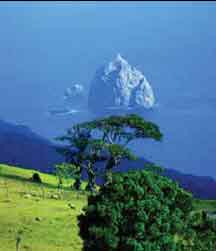 When the RMS St. Helena casts off from Portland Harbor in the south of England in mid-June, David Hollamby hopes the ship will be stuffed full of would-be developers and financiers. Hollamby is governor of St Helena, a tiny British island 1,200 miles off the coast of Africa in the South Atlantic, and he’s trying to build an airport to help ease his territory’s isolation.

“Better access is fundamental to this island’s future,” says Hollamby, who is appointed by the British Foreign and Commonwealth Office.The island has few industries outside canning tuna, and is losing its young to work overseas. Building an airport will spur tourism, he hopes, and make the export of goods such as fresh fish and flowers possible.

Currently, the only way to get to the island is on one of 25 visits a year from RMS St. Helena, which also puts in at Cape Town, South Africa and two other British-owned specks of South Atlantic real estate— Tristan da Cunha and Ascension Island.

But the RMS St. Helena is reaching the end of its working life and Hollamby has persuaded the British government to put the $41 million it would cost to replace her towards the $63 million estimated price tag of the airport project.

In fact, Hollamby and his advisors, London-based consultants GIC Limited, want bidders to build the airport, run it, guarantee an air service and help fund the gap in the project’s funding.