When Calpine Generating, a subsidiary of California-based power producer Calpine, came to market in late February with a $2.3 billion offering of high-yield bonds and term loans, it met resistance from investors who already held large amounts of the company’s debt.

Calpine needed the money to refinance a credit facility that was scheduled to mature in November 2004. It was forced to postpone the deal, however, in light of market conditions.

When the company returned to the market weeks later with a $2.4 billion package of bonds and loans, the deal was oversubscribed and placed with 200 investors, according to underwriters Morgan Stanley, which replaced Deutsche Bank, the lead manager on the original offering.

Calpine offered tighter borrowing agreements on the new offering, calling for proceeds of asset sales to be used to pay down debt, for example. It also reduced the portion of fixed-rate notes to $150 million from about $525 million originally and increased the amount of floating-rate notes.

At a time when investors are worried about the prospect of rising interest rates later this year, floatingrate notes, or FRNs, are proving to be popular with high-yield investors seeking a defensive position.

Cablevision Systems, the biggest cable-television operator in the New York region, offered $500 million of senior floating-rate notes to institutional investors on March 30 as part of a $1.5 billion private placement.

South Carolina-based Bowater, which produces newsprint and coated papers, sold $250 million of senior FRNs on March 10 in a registered public offering.The notes, which mature in 2010, were sold at 300 basis points over the London interbank offered rate, or Libor. 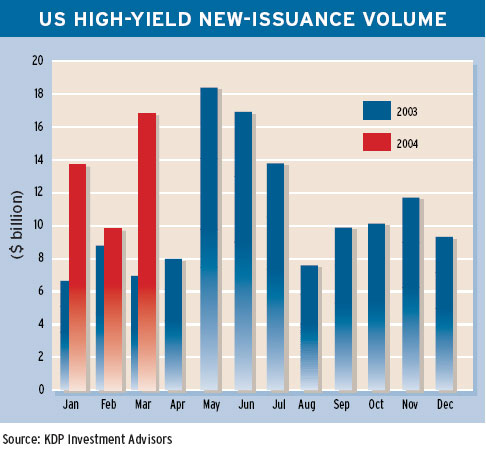 Companies are finding that by shifting some bank debt to FRNs, they can obtain more-favorable terms and lower their borrowing costs, analysts say.

“Fears of a possible rise in interest rates have made FRNs attractive for US highyield issuers,” says Letitia Hill, researcher at Vermont-based KDP Investment Advisors.

“Because this financing vehicle is becoming more prevalent and of interest to the high-yield market, it made sense for us to add it to the KDP new-issuance calendar,” Hill says.

Although the market is now pricing in a high probability that the Federal Reserve will start raising interest rates as early as this August, the Fed likely will be patient and wait at least until November, says Jan Loeys, global head of fixed-income research at J.P. Morgan Securities in London.

Once it starts tightening, the Fed likely will raise the 1% federal funds rate steadily up to 3.5%, he says. 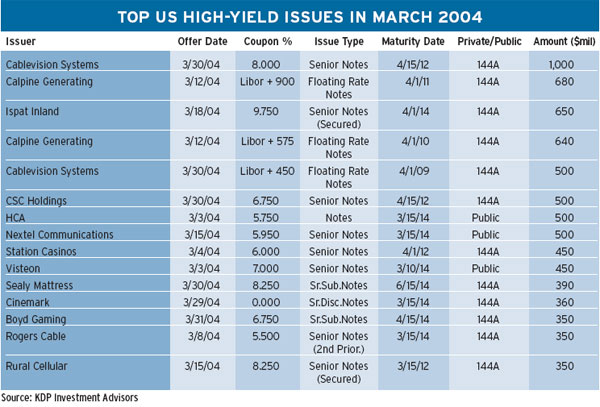