Corporate Finance : Strong Us Economic Data Give Dollar Some Vitality

The outlook for the US dollar brightened considerably following a surge in March non-farm payrolls, retail sales and the consumer price index.

Analysts say the barrage of stronger-than-expected US economic data has brought closer the day when the Federal Reserve’s patience will run out.

Rising US rates may be a necessary condition for a higher dollar ahead, but turmoil in the bond market could frighten away foreign investors, making it more difficult to finance the record current-account deficit, Gilmore says. “This is not a reliable backdrop for a sustained dollar rally,” he cautions.

The US balance-ofpayments outlook is more critical than a downgrade in euro-area growth in setting the medium-term trend for the euro against the dollar, says John Normand, a strategist at J.P. Morgan Securities in London.“We have revised lower our yearend target for the euro from $1.40 to $1.35, but keep the bullish-euro trend intact,” he says.

According to Normand, the historical correlation between US and euro-area growth differentials and the relative value of the two currencies is weak.A bearish view on the euro, therefore, must be based on more than simply an expectation that growth in Europe will once again under-perform growth in the US, he says.

“The medium-term trend is more a function of US balance-of-payments dynamics, which continue to favor broad dollar weakness,” Normand says.

However, some economists say the US trade deficit is a sign of strength, not weakness, and that the market will have no difficulty in financing the imbalance.

Of total US imports in 2003 of $1.5 trillion, about $720 billion represented trade within companies, such as the automobile trade between General Motors in the US and GM in Canada, says Stephen S. Poloz, chief economist at Export Development Canada.And of total US exports of $1 trillion last year, about $320 billion were intra-company, he estimates.

“This means that the intra-firm trade deficit, which is the natural consequence of the globalization of US companies, was about $400 billion,” Poloz says.

Since companies set up global supply chains to earn profits, these cross-border arrangements are selffinancing by definition, which leaves a US trade deficit of less than $100 billion that needs to be financed in the market, according to Poloz.That is far less than the $500 billion US international trade deficit that grabs the headlines and causes widespread angst about a much weaker US dollar, he says. The trade deficit is the product of the profitable globalization of US companies’ operations.

Concerns about terrorism and the uprising against the occupation of Iraq caused a shift out of US dollars and into Swiss francs in mid-April.

The fiercest fighting in Iraq since President Bush declared an end to major combat a year ago boosted the Swiss franc, which has a tradition as a safehaven currency.

The “Swissie,” as the currency is known by traders, also benefited from talk of an eventual rise in Swiss interest rates at a time when the European Central Bank is being pressured to cut rates to stimulate the sluggish European economy.

The Bank of England held UK interest rates steady at 4.0% for the second month in a row in April, but analysts expect it to raise rates a quarter-point this month.

“Employment and wage growth have picked up, retail sales are strong, and the housing market is red-hot,” Mills says. “All this adds up to inflation risk.”

The strong British pound was likely a main factor in convincing the Bank of England to put off a rate increase in April, analysts say. The bank already has boosted rates by a half-point since last November. 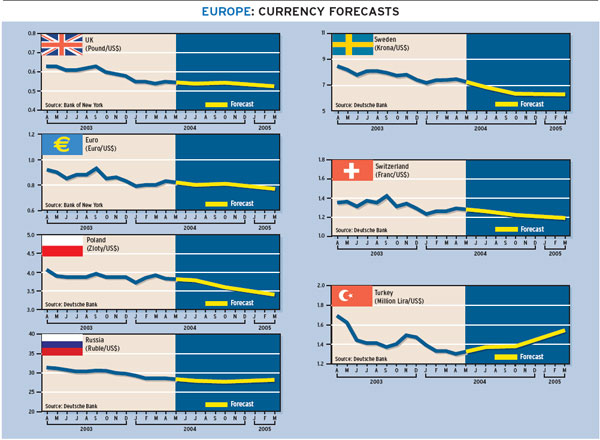 The Japanese Nikkei stock average rose above 12,000 in early April for the first time since August 2001, amid growing expectations that the Japanese economy is headed for sustainable growth.

Japanese stocks powered to multi-year highs at a time when U.S. and European stock markets were struggling to revive their recent rallies.

“It is no surprise that net foreign inflows to Japanese equities continue to be the chief catalyst to the yen’s surge,” says Ashraf Laidi, chief currency analyst at MG Financial Group in New York.

The yen stands apart from the rest of the currencies in that it is the only one that has managed to rally against the dollar during improving US economic prospects, Laidi says.

Japan’s rising exports to the US and Asia have boosted corporate profitability, although the rising yen is viewed as a potential threat.

“If needed, we will intervene,”Tanigaki says. “If there’s no need, we will not intervene.”

Meanwhile, the Bank of Japan in April raised its assessment of the economy for the first time since December 2003, saying that domestic demand is becoming firmer.

“Improvements in business sentiment have been spreading across industries,” the BOJ said.

Economists at JPMorgan Chase now forecast Japanese GDP growth this year at 3.8%, the fastest since 1990.

“This brightening growth backdrop together with persistent foreign buying of Japanese stocks appear to have given comfort to Japanese authorities,” says Rebecca Patterson, currency analyst at JPMorgan Chase in New York.“We believe they have completely stepped back from intervention since mid- March, and going forward are only likely to smooth an appreciating yen,” she says.