Judging by all the recent attention given to the J-curve by economists and analysts, the outlookcould get worse for the dollar before it gets better.

The dollar has been rising in recent weeks in anticipation of higher US interest rates, but analysts still concur that the greenback will need to decline further in order to boost US exports and begin to reduce the current account deficit.

In time, rising exports will rein in the current account, but not before higher import prices expand the deficit toward 7% of gross domestic product in 2006, says Robert DiClemente, chief US economist at Citigroup global markets in New York.

Many forecasters expect that the current account may be on the verge of a turnaround, attributing the past year’s increase in the deficit to the traditional J-curve effect, he says.

“However, we believe that the J-curve effect has not yet come into play,” DiClemente says. “The J-curve will add to the deficit when foreign firms begin to raise US import prices more aggressively, probably this year,” he says.

If Americans continue to import the same amount of foreign goods, they will pay a larger import bill as prices go up.

The current account deficit has continued to widen despite the dollar’s decline since early 2002. The gap accounted for about 4.5% of GDP three years ago and is now around 6.25%.

This widening shows how ingrained the deficit has become, reflecting the stronger growth of the US economy, as well as US preference for foreign goods, DiClemente says.

Until now, foreign firms have chosen not to raise prices to compensate for the dollar’s losses, accepting narrower profit margins, for fear of losing US market share.

This won’t continue forever, DiClemente says, and there already are signs that prices of imported goods have begun to march higher, even excluding petroleum.
Open-Mouth Policy 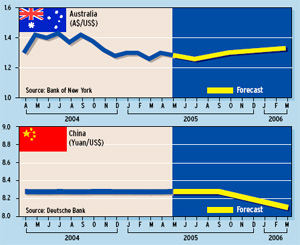 There seems to be a major disconnect between the inflation data, which have generally been tame, and the behavior of the US Treasury bond market, says David Gilmore, economist and partner at Essex, Connecticut-based Foreign Exchange Analytics. “The data on inflation are not what is driving Treasury yields up,” Gilmore says. “This is the result of Fed open-mouth policy.”

The mention of elevated inflation risk in the March 22 Federal Open Market Committee’s statement was the main impetus for higher bond yields, according to Gilmore. The financial markets are trading on assertions, rather than facts, he says.

“Markets seem content to follow, rather than to challenge, the Fed,” Gilmore says. “What we end up with are exaggerated moves around the time of the FOMC statements, or public remarks by Fed officials, and any hint of supporting evidence on what the Fed has in its craw at any given time,” he says. 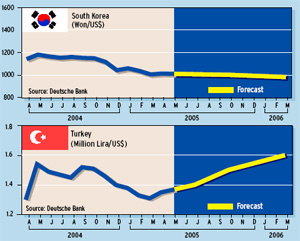 Japan’s tankan report, released on April 1, was much weaker than expected.

The tankan, the Bank of Japan’s quarterly survey of corporate sentiment, reinforced doubts about the staying power of the upturn in Japan’s economy that began in the fourth quarter of 2004, according to analysts at Brown Brothers Harriman in New York.

The report was consistent with BBH’s expectations that Japan will experience yet another year of very modest economic growth in 2005.

Most of the details in the report were not nearly as negative as the headline, but “not as negative” doesn’t translate to “positive,” the BBH analysts note.