Cover Story : The Remarkable Comeback Of The State Banking Sector

Only for the Brave 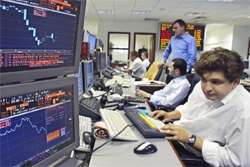 Private banks are smart, nimble, well managed; state-owned banks are slow, cumbersome and find it hard to make money. That conventional wisdom is being overturned in Russia, in the short term at least. After years of private banks making the running, public-sector institutions have made a strong comeback, putting on assets at a fast clip. State-owned Vneshtorgbank increased its asset base by over 50% last year, for example. And Sberbank, the public-sector savings monolith, continues to soak up almost two-thirds of Russian deposits.

That’s partly a reaction to last year’s run on private-sector banks, of course. As confidence seeps back into the private sector, the competitive situation may change. Most analysts argue, however, that as in other sectors of Russian economic life, the government is now attempting to build up national champions as a counterweight to