This has been a difficult year for Ukraine. First of all, it ended up in a painful and costly row with Russia over the price of its gas supplies. Then, in March, inconclusive parliamentary elections threw the country into a state of flux again. The winners that emerged from the March 26 parliamentary election—which include the pro-Moscow party of Viktor Yanukovych and the pro-Western liberal leaders of the Orange Revolution—have until the end of this month to sort out their differences. But some believe it will take much longer for most investors to gain the clear economic picture they need before they will sink money into this resource-rich nation of nearly 50 million people.

“I think there is a wait-and-see attitude. It will be halfway through 2007 before the [new government] builds enough confidence to attract investment,” says Daniel McCarthy, a professor at Northeastern University’s College of Business Administration in Boston. “They face the Catch 22 that any leaders in eastern and central Europe do. They need to build a positive economic environment to attract investment. But to stay in office, they need to take care of social programs or they won’t get re-elected.” 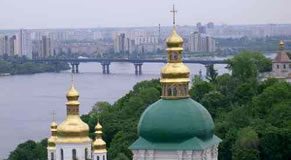 Analysts agree that the political uncertainty that followed the Orange Revolution—when citizens clad in the orange campaign colors of presidential contender Viktor Yushchenko took to the streets in November 2004 after allegations of widespread vote rigging—has been a major factor behind this nation’s dramatic drop in economic growth.

GDP growth sank from 12% in 2004 to just 2.5% last year and will hover below 3% this year as the political dust settles and the new government lays out an economic agenda. The surge in energy costs since Russia nearly doubled the price of natural gas in January has also hobbled the country’s economy.

“Ukraine is going to have to pay higher prices for gas for the long-term,” says Tanya Costello, an analyst at political risk firm Eurasia Group in New York City. She adds that the surge in energy prices has contributed to the country’s first current account deficit since the 1998 global fiscal crisis.

“Once again, there are a lot of the political uncertainties that accompany any changing government,” says Helena Hessel, a director at ratings agency Standard & Poor’s, adding that many necessary reforms, from revamping the civil service to an aggressive privatization program, were shelved in the run-up to the elections. “Ukraine is a huge market and has the possibility of connecting with the EU in the future. But for now the economy is still very weak,” she adds.

The Ukrainian banking sector, shielded from political differences by its crucial role in the economy, remains attractive to foreign firms. Lured by the country’s huge domestic market and an untapped consumer appetite for loans, credit cards and mortgages, European banks are buying into Ukrainian banks. “Banking systems in transition economies are always attractive,” says Hessel.

Ed Parker, head of emerging Europe sovereigns for Fitch Ratings, adds that Ukraine is one of the last outposts in eastern Europe for western European banks intent on aggressively expanding their balance sheets. “Ukraine’s high political risks, poor economy and generally weak levels of corporate governance and banking supervision and regulation have acted as a barrier to entry,” says Parker. “However, since the Orange Revolution, foreign banks have shown more interest.”