May 01, 2006
Author: Paula L. Green
They’ve been called the new European tigers, but many nations in central and eastern Europe have experienced troubled times recently. Now they’re fighting back. 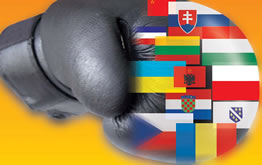 Fueled by a surge in inward investment and growing international demand for new opportunities,economies in central and eastern Europe are enjoying a period of unprecedented growth and development. The recent entrants to the EU,including Hungary and Poland,are improving productivity at a rate double that of their western European neighbors. Many countries in the region are seeing decreasing budget shortfalls and a stronger balance of payments,while at the same time their share of exports to western Europe is growing sharply.
But while some countries in the region are enjoying growing prosperity, the picture across the region is far from uniform. With its unwieldy mix of cultures, languages and politics and a geographical area that stretches from Estonia along the Baltic Sea in the north to Bulgaria in the south, the region remains economically diverse even as it forges closer ties with the West.

Eight countries in this vast territory—the Czech Republic, Estonia, Hungary, Latvia, Lithuania, Poland, Slovakia and Slovenia—are marking their two-year anniversary this month as the newest members, along with Cyprus and Malta, of the European Union. Romania and Bulgaria are officially set to join this coveted Western club of 25 democratic nations in January 2007. And Croatia retains its status as an official candidate country and looks set in 2009 to become the second former Yugoslav state, after Slovenia, to join the EU.

Analysts agree that political and economic diversity marks the region even though they can’t agree exactly which countries belong to this grouping of 15 to 20 countries that were aligned politically, economically and most importantly, perhaps, psychically with the socialist policies of the former Soviet Union before its dissolution in 1991.
Fariborz Ghadar, director of the Center for Global Business Studies at Pennsylvania State University, for example, thinks of the Baltic states as more of a Nordic mix wedged between the Baltic Sea and Russia. “They are surrounded by the former Soviets,” says Ghadar, referring to Estonia, Latvia and Lithuania’s borders with Belarus and Russia, “but I don’t think of them as being eastern European.”

Yet analysts do agree that it is each country’s degree of past psychic alignment with the West—even when the country was under the influence of the former Soviet Union or, in the case of Slovenia, part of the former communist state of Yugoslavia—that makes the difference in its economic and political progress and subsequent ability to lure investment dollars. “Those countries that were more repressed will have a tougher time adjusting to market economies,” says Sang Hwang, an analyst in the financial institutions group at SNL Financial in Charlottesville, Virginia. “We take a capitalistic attitude here for granted. We live it and breathe it, and it’s part of our story. But entrepreneurial skills don’t just come along; they can take a generation or two to develop.”

Hwang points to the entrepreneurial outlook of Slovenians, along with the country’s traditional ties with nearby Italy, as factors that have played in the solid economic performance of this nation of about 2 million people. The same entrepreneurial spirit is what has lured foreign companies to Hungary and its market of about 10 million people, says Hwang, pointing to US bank Morgan Stanley’s recent decision to set up research, service and information technology centers in the Hungarian capital of Budapest. “Countries with an entrepreneurial spirit will do well,” he adds.
Czechoslovakia’s long-standing tilt toward the West, along with solid economic reforms and a favorable tax structure that now includes a flat tax, are all factors behind Slovakia’s economic success, points out Eurasia Group analyst Jon Levy. “Slovakia is a core example of how economic reforms have attracted investment and created a favorable business climate,” says Levy, who works in the political risk firm’s New York City headquarters.

Slovakia, for example, is the site of South Korean auto manufacturer Kia Motors’ first European auto factory. The country’s low wages and proximity to western Europe helped persuade the Asian automaker, an affiliate of auto company Hyundai Motor, to sink more than $1 billion into the plant, which is expected to start turning out vehicles at the end of this year.

Ghadar says Romania’s traditional ties to France (French is the second language taught in Romanian schools, for example), its lower labor rates and its prospective move into the EU next year give it a better chance at economic prosperity than its southern European neighbors that face continued political turmoil. “They’re not there yet, but they’re more attractive than, say, Albania. And they have an efficient agricultural sector and produce good wines,” says Ghadar, noting that Romanian wines and fruits will have to compete with similar products turned out by western European farmers.

Romania’s political stability, coupled with an economic growth rate of about 5% and a domestic market of more than 20 million people, prompted money management firm Metzler/Payden Funds to move into the eastern European nation’s successful equity market last year, says Vladimir Milev, a financial analyst at the firm, which has offices in Los Angeles and Frankfurt and specializes in European equities. “Their equities are more heavily discounted than, say, the Czech Republic,” says Milev, a native Bulgarian who moved to the US in 1999. “They are not as advanced as the Czech Republic, and they have farther to go economically. But when they join the EU, the discounts will be unjustified, and then opportunities for good companies will grow.”
Paula L. Green