Stiff competition from its neighbors and growing deficits are threatening to thwart Hungary’s attempts to attract inward investment, but the country’s development agencies are fighting back.

Two years after its historic entry into the European Union (EU), Hungary presents a mixed picture of economic strength combined with uncertain financial conditions. On the one hand, this nation of 10 million people is reaping the trade and investment benefits of EU membership, producing strong and steady GDP growth and attracting foreign direct and venture capital investment. On the other hand, concerns persist over the nation’s ballooning budget and current account deficits, its ability to meet standards for adopting the euro as its currency and its capacity to compete with fast-growing, emerging economic rivals elsewhere in central and eastern Europe.

The growth figures are steady, if not spectacular. In the fourth quarter of last year, Hungary’s GDP was 4.2% higher than the same period in 2004. For the full-year 2005, GDP rose 4.1%, matching the country’s average GDP growth rate between 2001 and 2005, according to Eurostat, the EC’s statistical office. While Hungary’s GDP growth trounces Poland’s, which registered 2.6% growth in 2005, it trails both the Czech Republic and Slovakia, both of which posted 6% GDP growth last year and 4.7% and 5.5% growth in 2004, respectively. 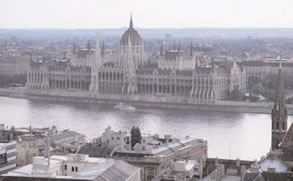 Hungary can take comfort, however, in that it has one of the emerging markets’ principal bogeys, unemployment, under control. Hungary’s 7.6% unemployment rate in February was less than half the 17% rate seen in Poland and the 15.8% in Slovakia that month, Eurostat reports. It was also lower than the rate for the Czech Republic (6.7%), European Union (8.5%) and the euro area (8%).

March with a consolidated deficit of 353.7 billion forints, the highest ever and more than 30% higher than the finance ministry’s previous forecast of 262.5 billion forints. Through the first quarter of the year, the state deficit already surpassed half of the country’s annual target. The government blamed the higher-than-expected deficit on one-off expenditures, such as payments to pensioners, and expenditures for the accelerated implementation of EU-supported projects for which the Hungary central budget pays in advance and is later reimbursed by the EU. However, Hungary has consistently missed budget-deficit targets over the past four years.

Hungary’s current account deficit presents a better picture. In the fourth quarter of 2005 it was lower than expected, declining to nearly E1.5 billion from E1.7 billion a year earlier. The full-year 2005 current-account deficit narrowed to E6.4 billion or 7.3% of GDP, from 8.6% of GDP in 2004, boosted by improvement in the trade deficit. But some analysts say the deficit could again balloon this year.

Nóra Szentiványi, an economist with JPMorgan Chase in London, predicts that the current-account deficit will widen to about 8.5% of GDP in 2006, boosted by “fiscal expansion and rising capital goods imports.” If that prediction is correct, Hungary will be hoping that its heavy outlay to encourage investment starts to show growing returns. If not, investors might begin to look elsewhere.