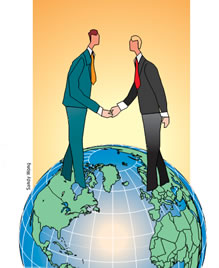 The currently busy market in cross-border mergers and acquisitions could slow significantly if protectionist moves to block such takeovers gain traction under the guise of safeguarding national security and protecting critical infrastructure, including energy, power, communications and transportation, bankers and analysts warn.

In the wake of the political uproar that forced UAE-based Dubai Ports World to give up control of six US ports it acquired from Britain’s P&O;, US lawmakers are drafting legislation that would tighten the review process for foreign acquisition of US companies. Meanwhile, many European governments are taking steps to block foreign takeovers, which now account for more than half of all mergers and acquisitions in the region.

“Despite record growth in international markets, we are witnessing a worrying trend toward political interference in cross-border deals,” says William Mills, chairman and CEO of Citigroup Corporate and Investment Banking for Europe, the Middle East and Africa. Resorting to protectionist measures to thwart such mergers could harm some economies, Mills said in a recent speech in London to the British American Business Council.

In the United States, the Senate Banking Committee unanimously approved a bill on March 31 that, if enacted, will make the national-security review procedure tougher for foreign companies buying a wide range of US assets. The proposed legislation would strengthen the Committee on Foreign Investment in the United States, or CFIUS, which is led by the Treasury secretary and includes representatives from 13 government agencies and departments from the White House, with input from law enforcement and national security officials. The committee has the authority to block foreign takeovers of US-based companies or require changes in the terms of foreign acquisitions that could affect national security.

Senator Richard Shelby, the Alabama Republican who heads the banking committee, began a campaign to revamp CFIUS last summer after the state-owned China National Overseas Oil Corporation, or CNOOC, tried to buy Unocal, one of the largest US oil companies. In June 2005 CNOOC made an $18.5 billion offer to acquire Unocal, topping an earlier bid by Chevron Texaco. The Chinese company ultimately withdrew its offer, however, citing US political tensions.

The House Financial Services Committee, chaired by Ohio Republican Michael Oxley, is expected to take up the issue of CFIUS reform after the April recess. McLernon says the hope is that whatever legislation is finally adopted will not have a negative impact on foreign investment. “But the foreign companies are watching,” she says. “The main thing that these companies want is a stable process that can be relied upon with some certainty."

Oxley said last month that the US should be welcoming and encouraging foreign investment, not shutting it out. “Let’s not be ruled by our worst fears,” he said. “Let’s not close off America as the terrorists would hope we would.”

The Dubai Ports World and CNOOC deals send a message of caution to potential foreign investors, says Jeffrey Houle, partner at Greenberg Traurig, an international law firm with 1,500 attorneys. “There likely will be new legislative authority enacted, and CFIUS in the future will more highly scrutinize proposed deals,” Houle says. This will make cross-border mergers and acquisitions more challenging, he says, although it won’t necessarily have a chilling effect.

Too many people would have to be notified, including members of Congress and state governors, according to Houle. “The more hands you have stirring the pot, the more opportunity there is for politicizing particular investments,” he says. Instead of there being a momentary pause or a passing chill in cross-border deals, the proposed legislation, which was spurred by the Dubai Ports World controversy, will institutionalize the reaction into law, he adds. 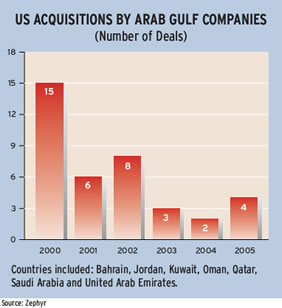 In a cross-Atlantic deal that is sure to face scrutiny, France-based Alcatel and Lucent Technologies of the US last month agreed to merge to create a company that will be based in Paris that will own the Bell Labs research center in New Jersey. The former AT&T; research facility, which does work for US defense and intelligence agencies, would operate as an independent subsidiary.

Despite the threat of a wave of protectionism driven by national-security concerns at the forefront, the total of cross-border acquisitions is expected to swell this year from last year’s nearly $350 billion, which was the highest since 2000. According to Manchester, England-based Bureau van Dijk Electronic Publishing, which maintains a proprietary database known as Zephyr, there were only $557 million of US investments by companies based in the Middle East, excluding Israel, last year, suggesting that fallout from the Dubai Ports World incident could be limited. Since 2000, companies from these Middle Eastern countries completed only $4.2 billion in US investments, while companies based in Israel completed $10.4 billion in US-targeted M&A; deals in the same period, according to Zephyr.

*Figures may not add up as more than one bank typically obtains credit for any one transaction.