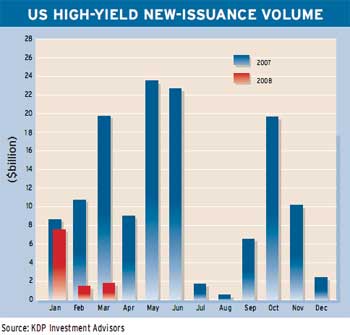 Oracle, the world’s third-largest software maker, sold $5 billion of bonds in April, and the successful sale helped to dispel some of the gloom in the corporate bond market.
Oracle’s offering of three series of investment-grade notes was the biggest such debt sale since January, when General Electric’s GE Capital subsidiary offered $6 billion of bonds.

Based in Redwood Shores, California, Oracle specializes in business software. The company said it would use the proceeds of the bond offering to fund its $8.5 billion purchase of BEA Systems, a leading developer of enterprise infrastructure software, or middleware, which is aimed at improving the performance of information technology systems. Net of BEA’s $1.3 billion of cash holdings, the purchase price was about $7.2 billion.

Sentiment in the corporate bond market improved after the Federal Reserve organized a rescue of Bear Stearns in mid-March, but spreads of corporates to US treasury securities remain historically wide.

Barclays Capital, the investment banking division of Barclays Bank, said in its latest quarterly outlook that the combination of recent Fed interest rate cuts and the Bush administration’s stimulus package will cause the US economy to strengthen in the second half of 2008.

“The markets are responding to the strong policy actions taken by the administration and the Federal Reserve, helping to restore confidence,” says Larry Kantor, head of research at Barclays Capital, based in New York. Nonetheless, credit concerns continue to plague the global economy, and weakness in the credit market has spread to counterparty risk, Barclays Capital says.

Financial markets have exhibited signs of stabilizing, but conditions are still a serious headwind to economic activity, according to economists at Citi. “While systemic threats have been curtailed, traditional cyclical risks have not,” says Robert DiClemente, managing director and chief US economist at Citi. “The economy is faltering visibly, and the pace of activity likely will be little changed in the first half of the year,” he says.

Corporate credit conditions remain poor and have not matched the recent improvement in credit-derivative indexes, DiClemente says. “Market making for corporate bonds is a capital-intensive activity, and the sacrosanct nature of the balance sheet has collapsed the willingness and ability of banks to intermediate,” he says.

Meanwhile, the high-yield US debt market remained subdued in March, with new issuance totaling $1.8 billion, up from $1.4 billion in February, according to Montpelier, Vermont-based KDP Investment Advisors.

Fairpoint Communications, which owns 32 telephone companies in 18 states, sold $551 million of 10-year senior notes in the private placement market. The Charlotte, North Carolina-based company on March 31 closed its acquisition of Verizon’s landline and Internet assets in northern New England in a $2.3 billion deal.

This article appeared in issue May 2008