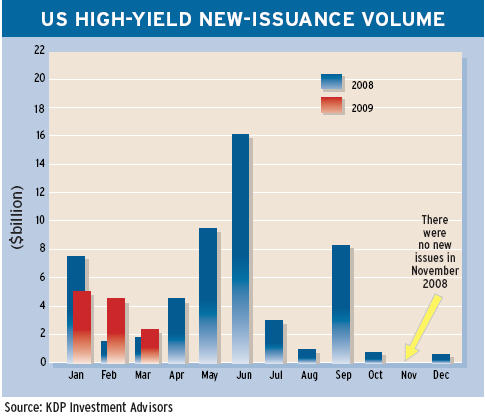 The “Big Bang” in the credit default swaps market on April 8 wasn’t exactly the shot heard round the world. While the CDS market underwent major infrastructure changes to standardize the insurance-like contracts and facilitate centralized clearing, there was little evidence to the outside world that anything significant was happening.

“The Big Bang seemed to be keeping people on the sidelines early in the morning, but as the day wore on, CDS traders came back into the market,” says Tim Backshall, chief strategist at Credit Derivatives Research, a Scottsdale, Arizona-based independent credit research firm that serves participants in the corporate debt markets.

Credit default index spreads closed little changed. Spreads on individual-company CDS were mostly tighter on the day. Insurers rallied on the news that they would be getting more money, in some cases, from the US Treasury’s Troubled Asset Relief Program (TARP). Several insurers had already bought or created banks to be eligible for the aid.

ICE Trust, the CDS clearinghouse unit of ICE, handled 613 transactions in its first four weeks of go-slow operations and plans to step up its activity in the future. It says that centralized clearing is helping to reduce systemic risk.

Chicago-based CME Group, the world’s largest derivatives exchange, plans to offer clearing of CDS based on the Markit CDX and Markit iTraxx indexes, which are the most actively traded CDS indexes.

TriOptima, which operates a portfolio-compression service for OTC derivatives dealers, eliminated $5.5 trillion in CDS notional principal in the first three months of 2009. The company, based in Stockholm, Sweden, runs compression cycles on a regular basis in North America and Europe to reduce the size and number of outstanding contracts. It does this by terminating existing trades and replacing them with a smaller number of new trades that require less capital to back them up.

The Big Bang protocol changes set new standardized terms for CDS traded on companies based in North America. The International Swaps and Derivatives Association (ISDA) said the successful implementation of the protocol was a major achievement for the industry. More than 2,000 market participants, including hedge funds, pensions funds and banks, agreed to adhere to the changes that will make the contracts more transparent and easier to trade. However, buyers and sellers will have to exchange more cash upfront, and dealers say that spreads will tighten, cutting into their profits.

“This is an excellent example of the entire industry pulling together with the regulatory community to benefit the soundness and integrity of the product,” says David Geen, general counsel at ISDA. Market participants will be bound by the decisions of Determinations Committees, which will decide whether a credit event, such as default or debt moratorium, has occurred. The same committees will decide whether a CDS auction will be held and whether a particular obligation is deliverable.

Combined with standard effective dates, these changes will introduce greater certainty to the market, making it easier to assess risk, according to ISDA.