Of the more than 1,000 unsponsored American depositary receipt programs created in the wake of last October’s rule change by the US Securities and Exchange Commission, a handful are attracting significant trading interest, helping to boost the profile of the over-the-counter market. Unsponsored ADRs are established by a depositary bank with no direct involvement of the foreign issuer of the underlying shares.

Companies that operate foreign stock exchanges have been among the most active ADRs traded in the OTC markets in the United States recently. The newly created unsponsored ADR for Hong Kong Exchanges and Clearing, the holding company for the Stock Exchange of Hong Kong and the Hong Kong Futures Exchange, traded more than 5.5 million depositary shares in March, for a dollar volume of $52 million, according to Pink OTC Markets. Pink OTC Markets is the leading inter-dealer quotation and trading system for OTC securities.

The unsponsored ADR for the Deutsche Börse traded more than 2 million shares valued at $13 million in the OTC markets in the US in March. Germany’s Frankfurt-based stock exchange opened a representative office in Beijing last December and has been actively seeking more foreign listings of its own.

Other actively traded unsponsored ADRs in the US OTC market that were created since October 2008 include a number of Switzerland-based companies: fragrances and flavors maker Givaudan, private bank Julius Baer Holding and Lonza, a chemicals and biotechnology firm.

Reckitt Benckiser, a UK-based manufacturer of household cleansers and personal-care products, also was an active ADR in the OTC securities markets in March, with more than 4.2 million shares traded, with a value of $32 million. French bank Crédit Agricole and tire maker Michelin, along with hypermarket operator Carrefour, also made Pink OTC Markets’ listing of active unsponsored ADRs.

Further Trading Gains Likely
“We expect the dollar volume of trading in these unsponsored programs to expand significantly in the next few years, with many of them likely to be upgraded to sponsored programs,” says Chelsey Loshak, director of marketing for International OTCQX, the top tier of the OTC markets, which offers greater visibility to investors and is limited to companies that can satisfy financial and disclosure listing standards.

Created in March 2007, OTCQX includes only sponsored ADRs, such as those of Wal-Mart de México, which was among the first to list. Such well-known companies as Adidas, Air France-KLM, BASF, Marks & Spencer, Benetton and Roche Holding use OTCQX as their US trading location. Loshak says OTCQX gives companies a presence in the US markets without duplicative regulatory costs required for listing on a traditional exchange. French auto maker Peugeot was admitted to OTCQX in April, bringing the total number of companies trading in the top tier to 55 out of more than 5,400 companies trading in Pink OTC Markets.

“Restricted to companies that are listed on a qualified overseas stock exchange, OTCQX separates credible companies from the large number of economically distressed and questionable companies that trade in the OTC markets,” Loshak says.

Most of the hundreds of unsponsored ADRs that have been created since last fall have landed in what is known as the grey market. Also known as “other OTC,” the grey market has no market makers. Trades in this bottom tier of the OTC markets are reported by broker-dealers to the self-regulatory organization, the Financial Industry Regulatory Authority (Finra), and distributed to market-data vendors.

On Top of the Grey Market
The top-traded ADR in the grey market in March was Japan-based Toppan Printing, which had a volume of $17 million. Among newly created unsponsored ADRs that were actively traded in the grey market in March were Shanghai Electric, Australia-based Brambles, Standard Bank of South Africa, China Railway Construction, Indonesia-based United Tractors and Greece-based Piraeus Bank.

When an OTC market maker, such as Knight Equity, Jane Street Markets or Merrill Lynch, decides it would like to quote a company that trades in the grey market, it can submit an application to have the securities listed on the Pink Sheets.
Among companies that began trading on the grey market as unsponsored ADRs and are now trading on Pink Sheets are France-based Vivendi, UK-based Premier Food and Sony Financial Holdings.

As of October 27, 2008, trades in all OTC equity securities, whether for domestic or foreign securities or ADRs, must be reported within 90 seconds through the OTC Reporting Facility. Finra disseminates last-sale information on all transactions on a real-time basis.

Meanwhile, the new SEC registration rules have made it easier for depositary banks to set up ADR programs without an issuer’s approval. Non-US issuers no longer need to apply in writing to the SEC for exemption from US reporting requirements as long as certain disclosures required in their home market are made available in English on their websites. Taking advantage of this automatic exemption, depositary banks have rushed to open new programs, sometimes without notifying the foreign company whose shares are the basis of trading.

Turning the Clock Back
The SEC’s intent in relaxing the filing requirements was to ease access to foreign equities for US investors, says John Germinario, CEO of Global Securities Services, based in Spring Valley, New York. “While this is all well and good, the mass creation of unsponsored ADR programs by the banks brings the evolution of depositary receipt products back 24 years, when unsponsored ADR programs were voluntarily consolidated to sponsored programs,” he says. The majority of the pre-1985 ADR programs were unsponsored programs, which created disorderly market conditions, he adds.

“These unsponsored, or renegade, ADRs are more confusing for investors, particularly when there are multiple depositary banks that can charge any fees they want,” Germinario says. The unsponsored ADRs for Hong Kong Exchanges and Clearing, for example, have four depositary banks: The Bank of New York Mellon, Citi, Deutsche Bank and J.P. Morgan.

“The ADR system was created in 1927 and continues to operate in much the same way as it did back then,” Germinario says. “The system is fragile as it is without these potentially damaging renegade programs,” he says.

In its comment letter to the SEC last year on the proposed rule change, The Bank of New York Mellon recommended the creation of unsponsored ADR programs that may not be duplicated by other depositary banks and that have many of the characteristics of sponsored ADRs. The bank said this could facilitate the investment by US investors in non-US shares while ensuring that investors are afforded the most basic protections expected of the US federal securities laws.

As it stands now, many of the most actively traded unsponsored ADRs have three or four depositary banks. By sponsoring an ADR program with a single depositary bank, an issuer can exercise a degree of control over what rights to grant the holders, according to a memorandum by the law firm Shearman & Sterling. Establishing a Level 1 program would eliminate any existing unsponsored programs. 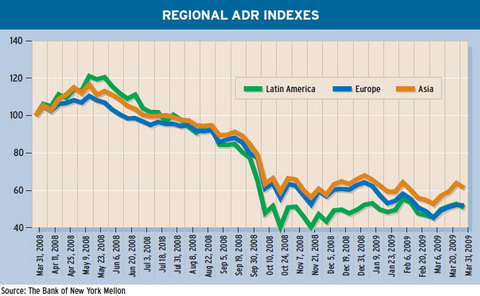